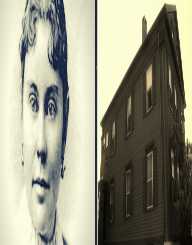 Lizzie Borden, who was put on trial for the murder of her father and stepmother, was born in Fall River, Massachusetts on the 19 July 1860. She was the daughter of a wealthy couple Sarah Anthony Morse and Andrew Jackson Borden. Her father was a self-made businessman who became a successful property developer and banker. Borden had an older sister Emma Borden. After the death of their mother, their father married Abby Gray. The sisters believed that their stepmother had married their father for his money and their home life was unsettled, both girls taking extended time away from the family home before the murder of their father. Before returning home shortly before the murder, Borden had been living in a boarding house.


Murders Of Andrew And Abby Gray

On the 4th August 1892, Andrew Borden and his wife Abby Gray were murdered in their home between 9 am, and 11 am. And on the 11 August 1892, Lizzie  Borden was arrested and jailed on charges of killing her father and stepmother. A grand jury began in early November and on the 2 December 1892, Borden was indicted. Borden’s trial started on the 5 June 1893 in New Bedford and ended on the 20 June 1893 with Borden's acquittal. Borden remained the prime suspect, but there were other suspects, although no-one was ever found guilty of the murders. The trial was a landmark in U.S. legal history, and the murders have been fictionalized and speculated about ever since.

Lizzie Borden had a Christian upbringing and attended church regularly. She was also involved in charity work, church activities and teaching Sunday School.

Along with her sister, Lizzie Borden inherited the bulk of her father’s estate and lived in comfort in The Hill area of Fall River. After the turn of the century, the sisters fell out.  They did not see one another again after Emma Borden left The Hill area house in 1905.

Lizzie Borden, who remained unmarried, died of pneumonia on the 1 June 1927.