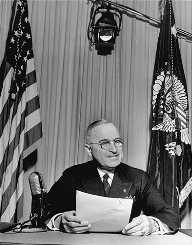 US President Harry S. Truman was born on the 8 May 1884 in Independence, Missouri. His parents were John, and Martha Truman were farmers, and he had three siblings.

Harry S. Truman graduated from high school in 1901 but did not do any tertiary education as his family did not have the finances to send him to college. He did administrative jobs including bookkeeping. After a few years of employment, he returned to work the family farm for the following decade.

Truman joined the Missouri National Guard as a young man, and when the US entered World War I in 1917, he enlisted even though at thirty-three years of age he was beyond the period of enlistment. He rose to the rank of captain in the US Army and was involved in the Meuse-Argonne campaign in France.

Returning to civilian life after World War I Truman had various forays into business including setting up a hat shop in Kansas City which failed to incur debts amounting to $20,000. Truman paid all the debts, which took over a decade to achieve.

Harry S. Truman got involved in politics when approached by political figure Thomas Pendergast to work as an overseer of highways. Pendergast also supported Truman when he stood for election as an administrative county-judge in Jackson County. (Pendagast was introduced to Truman via a family member who had served in the war with Truman). Truman excelled in this role and was reelected in 1930. He held this position until he was elected to the US Senate in 1934.

Truman was a supporter of the New Deal programme as well as the Civil Aeronautics Act (1938) which regulated the emerging aviation industry. He was also involved in the Transportation Act of 1940. Truman was head of the Senate Special Committee to Investigate the National Defense Program (1941-1944) which controlled military spending.

When Roosevelt was re-elected in 1944, Harry S. Truman became Vice President. Roosevelt died on the 12 April 1945 and Truman became the 33rd President of the United States. Truman was in office when Nazi Germany surrendered as well as when the United Nations came into being, and he was also at the Potsdam Conference along with Churchill and Stalin. Truman, who had been unaware of the development of the atomic bomb before taking over as President, sanctioned the bombing of Hiroshima and Nagasaki in August 1945.

After World War II, Truman was president when the Marshall Plan was implemented. He was also responsible for the Truman Doctrine which provided aid to Greece and Turkey. During his presidency, the US also airlifted food to Berlin and recognized Israel which was established on the 14 May 1948. Domestically Truman had to cope with labor disputes and strikes, but he managed to win a second term in 1949 after traveling around the country by train giving whistle-stop speeches to hundreds of people.

Truman’s second term was marked the Fair Deal, dealing with the threat of communism, spying and the cold war. He was involved in the setting up of the North Atlantic Treaty Organization. During mid-1950 North Korea invaded South Korea, and the US got involved in the Korean War (1950-1953).

Truman decided not to run for a third term as President, and the Truman’s subsequently returned to live Independence.