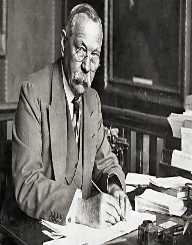 The creator of Sherlock Holmes, Arthur Conan Doyle was born on 22 May 1859 in Picardy Place, Edinburgh, Scotland. His parents were Charles and Mary Conan Doyle. He was their third child, born after two daughters. The Conan-Doyle’s were a wealthy, well-connected family but Conan Doyle's father was not successful in his career. He was an architect, and he also had issues with alcohol. The family lived in some poverty in Edinburgh. Conan-Doyle credited his Irish mother with instilling in him a love of literature and storytelling.

As was common at the time, Arthur Conan Doyle was sent away to boarding school when he was nine. His wealthy uncles paid for his education. He enrolled at Hodder Place, Stonyhurst in England where he spent two years (1868-1870). After preparatory school, he attended Stonyhurst College (1871-1876). Conan Doyle loathed boarding school, was bullied and found the entire experience of corporal punishment repugnant. His saving grace was his ability to spin fascinating stories, and he found an audience in the younger students who enjoyed his tales.

Conan Doyle was interested in medicine, and after leaving Stonyhurst in 1876, he studied medicine at the University of Edinburgh. In 1881, Conan Doyle graduated with a Bachelor of Medicine and Master of Surgery.

At medical school, Arthur Conan Doyle met Professor Dr. Joseph Bell who would inspire his greatest creation, Sherlock Holmes. Fellow students and classmates included Robert Louis Stevenson (author of Treasure Island) and James Barrie (author of Peter Pan). Around this time, Conan Doyle started to write fiction. His first short story was The Mystery of Sasassa Valley (1879). His next attempt was The American Tale for which he found a publisher.

In 1880, his third year at medical school, he served on the whaler Hope as the ship’s surgeon. This trip to the Arctic Circle inspired him to write Captain of the Pole Star. The money he earned working on as ship’s surgeon assisted his mother with the upbringing of his siblings.

In 1882, after returning from Africa, Arthur Conan Doyle had a short medical partnership with a former classmate in Plymouth.  When the partnership did not succeed,  he moved to Portsmouth and started practising on his own. This time the medical practice was a success. He continued with his writing, and  In 1887 his breakthrough story A Study in Scarlet was published, featuring the detective Sherlock Holmes. Between 1887 and 1927, Conan Doyle wrote sixty stories featuring Sherlock Holmes. He produced four novels and five volumes of short stories. In 1893, Conal Doyle killed off Sherlock Holmes but had to resurrect him after pressure from fans of the detective, including his mother.

Arthur Conan Doyle was a prolific writer. Apart from the Sherlock Holmes stories which brought him worldwide fame, he wrote seven historical novels, nine other novels, historical non-fiction, short stories, an autobiography, poems, and articles. One of his most successful books apart from the Sherlock Holmes stories was The Lost World. He also wrote about  Marie Celeste, a maritime mystery which gripped the Victorian world.

In 1900 Arthur Conan Doyle was sent out to South Africa to be a medic in the Anglo-Boer war. He wrote a pamphlet entitled The War in South Africa: Its Causes and Conduct. This publication was very popular as it defended the British position in what was an unpopular war. Conan Doyle received a knighthood in 1902. He later wrote the Great Boer War based on conversations he had with British and Boer soldiers during the conflict.

The Sherlock Holmes series of books and stories.

Arthur Conan Doyle married his first wife Louisa Hawkins in 1885. They had two children. Then Louisa came down with tuberculosis. In 1895 they travelled to Egypt, hoping it would improve Louisa’s health. Disease persisted, and in 1906, Louisa died. The same year, Conan Doyle’s father died. In 1907, Conan Doyle married Jean Leckie, and they had three children. One of his sons, Kinsley Conan Doyle, died in World War I in 1918. Kingsley’s death was a huge blow and left his father with lingering depression and regret.

The Conan Doyle family were traditionally Roman Catholic. However, at university, Conan Doyle discovered Spiritualism and afterwards, no longer considered himself a Roman Catholic. Conan Doyle retained his interest in spiritualism throughout his life. He joined the Society for Psychical Research and became convinced that telepathy existed. In 1916, he published The New Revelation.

Arthur Conan Doyle travelled widely attending spiritualist meetings and claimed to have seen the spirits of both his mother and his nephew. In 1922, he wrote The Coming of the Fairies. The topic concerned two young sisters who claimed to have seen fairies. The Cottingley Fairies incident stretched credibility and finally, after many years, the sisters confessed that it had been an elaborate hoax.

Conan Doyle was a motoring enthusiast and one of the UK’s earliest motorists. In 1911, he participated in the Prince Henry Tour in 1911. This motoring event, organised by a Prussian prince, was a race between  British and German cars. Conan Doyle was also an early fan of snow-skiing and helped popularise the sport. He was a cricket enthusiastic, participated in boxing in his younger days and played soccer.

Conan Doyle died of heart failure in the garden of his home in Crowborough, East Sussex.

Having produced one of the most iconic characters in English literature.

The Cottingley Fairies incident stretched credibility, and Arthur Conal Doyle came across as gullible to some people.