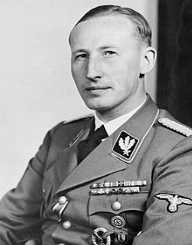 Reinhard Tristan Eugen Heydrich was a prominent German Nazi official. Born on March 7, 1904, he was the main brain behind the Holocaust. Heydrich held several positions including SS-Obergruppenführer und General der Polizei (Senior Group Leader and General of Police). In addition, he was the chief of the Reich Main Security Office. Under that office were the Gestapo, SD, and Kripo. He also held the position of Stellvertretender Reichsprotektor (Deputy/Acting Reich-Protector) of Bohemia and Moravia. Heydrich coordinated several attacks, arrests, deportations, and murders of numerous Jews in German-occupied Europe. He was the president of the International Criminal Police Commission (later Interpol).

In January 1942, he chaired the Wannsee Conference that initiated plans for the Final Solution to the Jewish Question. It ultimately resulted in the Holocaust that saw over 2 million people including 1.3 million Jews killed in Nazi concentration camps.

Reinhard Tristan Eugen Heydrich was born on March 7, 1904, in Hallen an der Saale. He was born to a Protestant father Richard Bruno Heydrich and Roman Catholic mother, Elisabeth Anna Maria Amalia Heydrich. His father was a singer and composer and his mother a piano teacher. Born into a family of musicians, Heydrich became accustomed to music. As a result, he gained an interest in playing the violin. Heydrich and his brothers received strict and patriotic upbringing. He was a brilliant student and a talented athlete.

Following the recapture of Halle, Heydrich joined the Deutschvölkischer Schutz und Trutzbund (National German Protection and Shelter League). He subsequently joined the German Navy in 1922. Heydrich rose through the ranks and by July 1928, he attained the rank of sub-lieutenant (Oberleutnant zur See). As his ranks increased, he became not only arrogant by over-ambitious. In April 1931, Admiral Erich Raeder dismissed Heydrich from Navy for "conduct unbecoming to an officer and gentleman." He had broken an engagement promise to a woman he had dated for six months. Heydrich called off that engagement to enable him to engage Lina von Osten.

Heydrich joined the Navy Party in Hamburg on June 1, 1931, with party number 544,916. After six weeks, he joined the SS, as an Untersturmführer with the number 10,120. After an encounter with Heinrich Himmler, he gained responsibility for the Sicherheitsdienst (SD; “Security Service”). SD was the intelligence and surveillance arm of the SS. In December that year, he gained promotion as SS-Sturmbannführer (major). In 1934, he became SS chief for Berlin. Two years later, he became took over the SD, the Gestapo, and criminal police, after Himmler rose to chief of all German police forces. In 1938, he played an instrumental role in the purge of the German army high command. He also spread propaganda news that led to the removal of Joseph Stalin in the Red Army.

Heydrich pursued enemies of the Reich as he wished after becoming head of the Gestapo. In November 1938, during Kristallnacht Heydrich ordered the Gestapo and the SS to arrest and imprisoned thousands of Jews in concentration camps. Heydrich rose to become the head of the Reichssicherheitshauptamt (“Reich Security Central Office”). The organization was in charge of security and secret police of the Third Reich.

The event leading to the Holocaust

He worked with Adolf Eichmann in the first deportation of Jews from Germany and Austria to ghettos in occupied Poland. Following that, he organized the Einsatzgruppen that killed about a million Polish and Soviet Jews in the occupied territories. Heydrich ensured the establishment of the Judenräte (“Jewish Councils”) that ensured German directives were pursued in Jewish ghettos.

Heydrich obtained orders from Hermann Göring on July 31, 1941, to undertake the “final solution to the Jewish question.” He had the authority to organize and take all the administrative duties to ensure the extinction of the Jews. That year Himmler gave him the responsibility of the forced movement of about 60,000 Jews from Germany to Czechoslovakia. They finally landed in Lodz Ghetto in Poland.

In September 1941, he gained appointment as Reichsprotektor (governor) of Bohemia and Moravia (now in the Czech Republic). He, therefore, melted out oppression and mass execution to bring calm and improve social and economic conditions in Czech.

On January 20, 1942, he chaired the Wannsee Conference that among other things discussed the implementation of the “final solution.” This ultimately led to the killing of millions of European Jews.

As Heydrich achieved success in his deeds, he became arrogant and had false allusions about his level of security. Therefore, he took for granted threat on his life. On May 27, 1942, two Free Czech agents attacked his Heydrich’s car with a bomb. He was driving without a security escort. Heydrich suffered severe injuries from the attack. He died on June 4, 1942, in a Prague hospital. In retaliation of his death, the Gestapo murdered hundreds and Czechs and wiped out the village of Lidice.