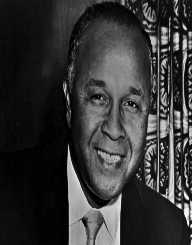 Percy Lavon Julian was an American chemist who is best known for his pioneering work on steroids and becoming the first black chemist to be inducted into the National Academy of Sciences in America.

Percy Julian was born on 11 April 1899 in Montgomery, Alabama. He was the eldest child of James Sumner Julian and Elizabeth Lena Julian. Both his parents had graduated from college. His father worked as a clerk for the U.S Postal Service and was the son of a slave. Julian’s parents encouraged all their children to work hard at their education. It was rare for black children to receive more than primary education in the Southern States of America at the time.

Julian, however, went on to attend DePauw University in Indiana. Despite moving to the north of the country, Julian still faced racial discrimination. He was only able to find lodgings on campus or a place he would be allowed to dine. He eventually found accommodation in the attic of a University fraternity house in return for doing housework. Julian graduated in 1920 and went to become a chemistry instructor as means to studying for a doctorate in chemistry.

Percy Julian was offered a position in Harvard, but this was revoked to avoid upsetting white students by employing a black teacher. He instead found employment at Howard University as an instructor and eventually received a scholarship to study in Europe. Julian completed his doctorate at the University of Vienna. This made him just the third African American to earn a doctorate in chemistry.

Percy Julian returned to Howard University following the completion of his studies in Vienna. He was made the head of the chemistry department. This led to him becoming embroiled in the politics of the university. He was involved in the sacking of two colleagues. A series of letters he had sent from Vienna was published in the local papers, and he was named in the divorce proceedings of one of his colleagues. The scandal raised by this forced Julian to resign from the university.

Percy Julian was saved by his former school in Indiana, DePauw University who offered him a position teaching organic chemistry. At DePauw University he worked with William Blanchard on isolating plant sterols and converting them into human steroid hormones. His earliest work dealt with the sterols of the calabar bean. Julian continued to find his career curbed by racial discrimination.

DePauw refused Percy Julian a professorship, and some private companies turned him down due to his race. Julian finally found employment at the Glidden Company, a soybean oil supplier. Julian had first contacted the company looking for a supply of oil for his research. The company instead offered to hire him as their director of research, due in part to his fluency in German.

Julian oversaw the extraction of soy protein which was much cheaper to create than milk proteins. This research cut the cost of products such as paper coating, glue, and water-based paint. The isolated protein would eventually go on to be used as a fire extinguishing foam and was first used by the U.S Navy in World War II. Julian also worked on finding a way to create the human hormones estrogen and testosterone from sterols.

At the time chemists were using extracts from animal spinal cords, but the practice was highly wasteful as it required hundreds of pounds of spinal cords to create a useful amount of hormones. Percy Julian, however, was able to make thousands of dollars’ worth of human sex hormones from just a hundred pounds of cheap soy. A pound of progesterone at the time was valued at over half a million dollars in today’s money.

Julian’s work allowed for the cheap manufacture of hormone deficiency drugs on an industrial scale. Julian also made a breakthrough in the development of cortisone, again by using soy-based sterols he was able to remove expensive chemicals from the production process. Cortisone became much easier to produce and is now used commonly for pain relief.

In 1953, Percy Julian left Glidden to start his laboratory. Julian Laboratories was founded in 1953 and began competing with Syntex, a pharmaceutical company, in the development of progesterone. Julian initially found this difficult as he was blocked from importing the required yams, the base ingredient, from Mexico.

Julian had to appear in front of a U.S Senate committee before he was granted an import licence. After this, the price of progesterone plummeted. Despite the collapse, in the cost of progesterone, the price of the drugs it was used to make were kept artificially high. Julian sold his company in 1961 for 2.3 million dollars.

The N.A.A.C.P awarded Percy Julian the Spingarn Medal in 1947. He was named Chicagoan of the Year in 1950. He won the Chemical Pioneer Award in 1968, which was awarded by the American Institute of Chemists. In 1973 he became the second African American scientist and the first African American chemist to be inducted into the American National Academy of Sciences.

Percy Julian married Anna Roselle in 1935. Julian had been blamed for ‘alienating the affections’ of Roselle during the divorce proceedings of her marriage to Robert Thompson, a Howard University colleague of Julian. Together they had two children, Percy and Faith. In 1950, the family moved to Chicago, and their home was repeatedly attacked. Julian died from liver cancer on 19 April 1975.