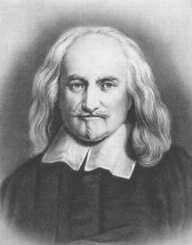 Thomas Hobbes was born on April 5, 1588, in Westport, Malmesbury, England. He was born prematurely, due to his mother’s fear of the invasion of the Spanish Armada. There is not much known about his childhood. His father was the vicar of Charlton and Westport. He also had an older sister and brother. When Hobbes was still a child, his father was involved in a fight with the local clergy, which forced him to abandon his family and leave London. The family was taken care by his brother Francis, who was wealthy and had no family.

Hobbes was educated at the Westport church school and later went to Malmesbury school. He was then taught by Robert Latimer, who had graduated from the University of Oxford. In 1603, Hobbes went to study at Magdalen Hall. At University, Hobbes was little interested in the academic learning and followed his path of education. He earned his B.A. degree in 1608.

After earning his degree, Thomas Hobbes became a tutor to William, the son of William Cavendish, Baron of Hardwick. Hobbes and the young William took a tour through Europe in 1610. During this time, Hobbes studied classical Greek and Latin authors. This eventually led him to translate the Thucydides’ History of the Peloponnesian War in 1628. The same year, Cavendish died from the plague, and Hobbes was dismissed from his work.

When Thomas Hobbes first turned to the study of philosophy, he was interested in the physical doctrine of motion and physical momentum. He devoted his life to conceive the system of thought to the elaboration. He worked out and separated a doctrine of body, and showed how the physical phenomena were explicable regarding motion. He also singled out Man from nature and showed that specific motions were involved in the production of particular sensations, knowledge. He proposed to unite the separate phenomena of Body, Man and the State.

In 1637, Hobbes came back to England from his travels in Europe. By 1640, he wrote the treatise The Elements of Law, Natural, and Politic. However, when the Long Parliament succeeded the Short Parliament in 1940, he felt that the circulation of his treatise will not favor him and fled to Paris. There he lived for the next 11 years of his life.

Thomas Hobbes wrote a critique of the Meditations of First Philosophy of Descartes. He also continued his works and released the third section De Cive. He also worked on the first two sections of this work and published a short treatise on optics. By 1645 he had built an excellent reputation in the philosophical circles.

In 1642, the English Civil War broke out, and many of the king’s supporters fled to Europe. Thomas Hobbes met with several of the people he knew, which sparked his interest in politics. Hobbes republished and distributed De Cive. In 1647, he began working as the mathematical instructor to Charles, Prince of Wales.

The company of the royalist Hobbes met in Paris led him to produce Leviathan, the book which set out his theory of civil government about the political crisis which resulted in the war. Leviathan, or The Matter, Forme and Power of a Common Wealth, Ecclesiasticall and Civil was published in 1651. The work made a significant impact immediately after its publishing. This work severed his ties to the exiled royalists and angered Anglicans and French Catholics. Hobbes had to appeal to the new, revolutionary English government and fled back to London.

In 1658, Thomas Hobbes published the final section of his more than 20-year-long work De Homine. Besides his philosophical theory, Hobbes also published some controversial writings on mathematics and physics. He continued to publish his philosophical works, and Hobbism became a byword which the society ought to denounce. Hobbes was remembered by the new King Charles II, who was his former student. Charles II called him out to the court and granted a pension of 100 pounds.

In 1666, the House of Commons introduced the bill against atheism and profaneness, and Hobbes works were labelled as heretic. He was not prosecuted in any way and was protected by the King; however, Hobbes never published any works in England concerning human conduct. In his final years, Hobbes published an autobiography in Latin verse and translation of four books of the Odyssey into English rhymes. He also translated Iliad and Odyssey in 1675.

Thomas Hobbes suffered a bladder condition in 1679, after which he had a paralytic stroke. He died on December 4, 1679.