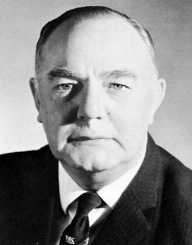 Pieter Willem Botha was born 12th January 1916, to Pieter Willem Botha and Hendrina Botha. He was born in Paul Roux, Orange Free State Province, South Africa. His father was a commando in the Second Boer War fighting against the British, and his mother was held in a British concentration camp during the war.

P. W.  Botha began school at the Paul Roux School and then studied at Voortrekker Secondary School in Bethlehem, in South Africa. After graduation, he enrolled at Grey University College, where he was going to study law. He dropped out of college to begin his political career.

P. W.  Botha began his career working for the National Party. He also joined the Ossewabrandwag, a right-wing Afrikaner nationalist group who sympathized with the Nazis. After the Nazis attacked Russia, Pieter Willem Botha left the Ossewabrandwag condemning the attack. He pledged his allegiance to Christian nationalism instead, which also had a far right-wing.

In 1946, Botha was elected to lead the National Party Youth. In 1948, he joined the House of Assembly as the member for the seat of George.

In 1958, Botha became Deputy Minister of Internal Affairs under the leadership of Hendrik Verwoerd. In 1961, he became the Minister of Colored Affairs.

Verwoerd was assassinated in 1966, and his successor was B.J. Vorster. Vorster promoted Botha to the position of Minister for Defence.

Vorster led the party for 14 years. He resigned amidst a scandal, and Botha was elected to the leadership position of the National Party.

Botha's main agenda was constitutional reform. He wanted a central government that was white, but also black leadership under the whites to self-govern the blacks, colored and Asian population. By 1977 he had successfully produced nuclear bombs, which were eventually destroyed in the 1990s. He also kept a tight reign on ruling over South-West Africa, particularly with Cuban troops in Angola. It was Botha that established the controversial Koevoetunit of the police. Botha also introduced compulsory military service for all white men in South Africa.

In 1983, Botha put forward a new constitution, but only the white population were able to vote on it.

The position of Prime Minister was replaced by the role of State President, which, of course, Botha became. The position was far more powerful than it had been previously, and the President’s Council had the final say in any matters. It was set up in such a way that the Colored and Indian sectors could never outvote the White House, even if they stood together. This meant control was maintained by Botha and his white party members. had also succeeded in suppressing freedom of speech.

P. W.  Botha legalized interracial marriage, and made allowances for racially mixed neighborhoods, although the latter was kept under strict control and required permits. On the other hand, he wouldn’t allow blacks to have any political power, and he kept a close eye on anti-apartheid activists.

Economic sanctions were put in place by the international community, which began to have a serious impact on the country. At the same time, the black population became very restless. Surrounding countries, governed by blacks, encouraged the civil unrest, and Botha warned them not to interfere. Airstrikes were ordered to put them back in their place.

Botha's authority was undermined by international leaders, and in December 1988, he signed the Tripartite Agreement in conjunction with Angola and Cuba. This meant he relinquished control of Namibia, and elections were then allowed to take place there.

In January 1989, Botha had a mild stroke. In February he resigned as leader of the National Party. He expected Barend du Plessis to take his place, but F.W. de Klerk was elected instead, much to the dismay of Botha. Botha refused to step down from the presidency, but eventually came to a compromise and de Klerk took control. Under de Klerk’s control, the apartheid movement was shut down. Botha retired and largely remained out of the public eye. In 2006, Botha died of a heart attack.

It is well recognized that under the leadership of Pieter Willem Botha, thousands of people were arrested and detained without trial, and many were tortured and killed. Botha refused to apologize for apartheid, believing he had done the right thing for his country.

In 1943, Pieter Willem Botha married Anna Elizabeth Rossouw. The couple had five children, two sons, and three daughters. They were together until Anna’s death in 1997.

In 1998 Pieter Willem Botha married Barbara Robertson, and they were together until his death in 2006.