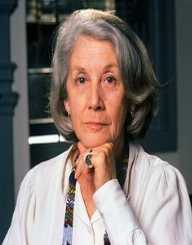 Nadine Gordimer was born on November 1923 near Johannesburg, South Africa. Her father was a watchmaker from what is now Lithuania, and her mother was from London. Her parent's influence was one of the many things that shaped her interest in racial and economic problems in South Africa.

Gordimer attended a Catholic convent school, but as a child was often home-bound. Her mother had reasons for it, which she never disclosed to Nadine. Since she was often isolated from her peers, Gordimer started to write at an early age. She published her first stories when she was only 15 years old. The story “The Quest for Seen Gold” appeared in the Children’s Sunday Express in 1937. Gordimer published her first adult fiction book when she was 16.

After receiving her education at home, Gordimer enrolled at the University of the Witwatersrand. She attended the university for a year but did not complete her education. Instead, Gordimer moved to Johannesburg and lived there from then on. While studying, Gordimer continued to write and publish her stories, which she later collected into one publication called Face to Face (1949).

Gordimer’s work became widely known after the New Yorker published her story “A Watcher of the Dead” in 1951. Nadine Gordimer believed that short stories are the best literary form of our time and continued to write in that manner. Gordimer published her first novel The Lying Days in 1953.

In 1960, Gordimer’s best friend Bettie du Toit was arrested for bringing food to the black ghetto, which was forbidden by law. The same year, Sharpeville massacre took place, where the police killed 69 protestors. After these events, Gordimer entered the anti-apartheid movement and became active in South African politics. She was close friends with Nelson Mandela’s attorneys and helped Mandela to edit his speech “I Am Prepared to Die.”

In 1960s and 1970s, Gordimer continued to live in Johannesburg but also went to teach in United States universities. In 1961 she received her first major award for her short fiction collection Fridays Footprint- the WH Smith Literary Award. Due to her political activism, the South African government banned several of her works. Her first experience with censorship was in 1976 when her work The Late Bourgeois World was banned.

Gordimer joined the African National Congress, which was an illegal organization in the government. She saw the organization as the best way to reverse South Africa’s treatment towards its black citizens. Gordimer actively participated in anti-apartheid demonstrations and traveled internationally to speak against South African apartheid and political repression in the country.

Nadine Gordimer received wide recognition early in her career and had received numerous awards for her works. The culmination of her accomplishments was in 1991 when Gordimer received the Nobel Prize for Literature. Gordimer was also one of the founders of Congress of South African Writers and the Vice President of International PEN.

In the 1990s and 21st century, Gordimer began to put her efforts towards HIV/AIDS activism. She addressed the major public health issues in the country and organized fundraising for Treatment Action Campaign. While on her tours, Gordimer also spoke about foreign policy matters and discrimination beyond South Africa.

Gordimer’s work focuses on political issues, as well as moral and psychological tensions on the racially divided country. Her books are mainly about love and politics, concerning race issues in South Africa. Her characters are simple, ordinary people.

Gordimer’s first marriage was in 1949 to Gerald Gavron. He was a local dentist. The couple had a daughter in 1950, but in 1953 they divorced. The following year, Gordimer married Reinhold Cassirer. He was a respected art dealer, who established the South African Sotheby’s and later ran his gallery. The marriage lasted until his death in 2001. In 1955, the couple had their son Hugo. He became a filmmaker in New York and collaborated with his mother on several documentaries.

In 2006, Ronald Suresh Roberts published a biography on Gordimer, No Cold Kitchen. She granted access to many of her documents and gave interviews, with the agreement that Roberts will let her authorize the biography. However, they failed to agree on several issues, like her husband’s death and the affair she had in the 1950s. Roberts published independently, and Gordimer disowned the book.

Gordimer died of natural causes when she was 90 years old, in 2014. Besides her Nobel Prize for Literature, Gordimer has also received numerous other awards and honors. These include honorary fellowship of the Scottish Arts Council and Modern Language Association, Neil Sachs Prize, 3 Central News Agency Literary Awards and 15 honorary degrees.