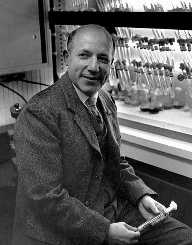 Otto Heinrich Warburg was born on October 8, 1883. He was a German physician and physiologist. He was nominated for a Nobel Prize twice.

In 1908, Otto Heinrich Warburg was a research scholar at the Stanzione Zoologica Anton Dohrn, a marine biological research institute in Naples. At the Institute he started experimenting on the consumption of oxygen in the sea urchin. He also discovered that small amounts of cyanide could inhibit cell oxidation. In 1914, he left Naples at the beginning of World War I. He became an officer of the Prussian Guard Regiment. He was awarded the Iron Cross for bravery.

In 1918, Otto Heinrich Warburg left the army and became a professor at the Kaiser Wilhelm Institute for Biology in Berlin-Dahlem. In the 1920s, he began investigating the method by which cells in living organisms consume oxygen. He also developed manometers which were capable of measuring gas pressure. The manometers were also used in monitoring respiration in cells. He discovered the function of cytochromes. He also founded that carbon monoxide slowed down respiration. He also researched cellular catalysts and their role in respiration.

In 1932, Otto Heinrich Warburg discovered flavoproteins and Vitamin A in the retina. In 1935, he discovered nicotinamide. In 1944, he was nominated for a second Nobel Prize in Physiology by Albert Szent-Gyorgyi. In his lifetime he published one hundred and seventy eight scientific papers. He worked almost until his death.

In 1931, Otto Heinrich Warburg won the Nobel Prize in Physiology or Medicine for his discovery of the nature and mode of the action of the respiratory enzyme.  In 1934, he became a Foreign Member of the Royal Society. In 1952, he received Pour le Merite.

Otto Heinrich Warburg never married in his life as he was most committed to his work. He worked until near to his death. He passed away on August 1, 1970, at his Berlin home that he shared with Jakob Heiss.