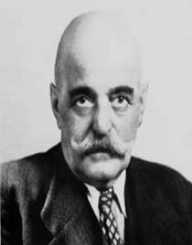 George Gurdjieff was an Armenian mystic and philosopher who developed the spiritual theory of the Fourth Way.

George Gurdjieff was born in Alexandropol, Armenia, which was then part of the Russian Empire. His date of birth is unknown, and estimates cover the decade between 1866 and 1877. The area was a melting pot of cultures at the time, with Russians, Turks, Armenians and Pontic Greeks calling the place home.

Gurdjieff was the product of a marriage between his Armenian mother and Greek father. As well as his mixed heritage he was also influenced by the Russian language and these combined to shape his worldview. Gurdjieff spent his formative years in the city of Kars which was a border city between the Ottoman and Russian Empires. Due to the multi-ethnic and multi-denominational make-up of the city,

George Gurdjieff was exposed to some different faiths and philosophies from a young age. He also became proficient in some languages, he was fluent in Russian, Armenian, Turkish and Greek and also had a firm grasp of some European languages. Gurdjieff claimed to have experienced or witnessed some phenomena as a youth. He searched for explanations for these events in the many faiths within Kars and also within Russian scientific literature.

However, George Gurdjieff was unable to find satisfactory answers and began searching for meaning outside the traditional confines of religion and science. This led to him undertaking some travels in search of meaning. He claimed to have travelled to Egypt, Iran, India, Central Europe and Rome. He claimed to have spoken to several ‘remarkable men’ during his travels, and these would form the basis of his teachings. He rarely spoke of these journeys but did write, Meetings with Remarkable Men, on the issue, but experts believe the stories in the book are at best symbolic and at worst complete fiction.

George Gurdjieff returned to Russia in 1912 and began teaching. He attracted many students to his ‘Fourth Way’ philosophy. Gurdjieff also wrote and produced a ballet, 'The Struggle of Magicians’ in 1914. He was repeatedly interrupted in his work by the Russian Revolution and Civil War. He relocated numerous times within Russia, his family had been forced to flee Alexandropol, and Turkish forces had shot his father.

In 1919, Gurdjieff, his family, and his students moved to Georgia to escape the political crisis in Russia, and as Georgia also fell into chaos, they relocated again, this time to Turkey. He established the first Institute for the Harmonious Development of Man. In 1921, Gurdjieff travelled to Western Europe and lectured on his work. He settled in Paris and set up another Institute for the Harmonious Development of Man. He embarked on a tour of North America in 1924 and was involved in a near-fatal car crash while there.

In 1932, George Gurdjieff began a new all-female teaching group which lasted until 1936. He remained in Paris throughout the Second World War. His later years were marked by entertaining his pupils at dinner parties rather than lecturing or teaching. Gurdjieff taught that people were incapable of perceiving the real reality because they did not possess a unified consciousness. Gurdjieff felt existing philosophies, sciences and religions only catered to one dimension of a person’s three dimensions, mind, body, and emotions.

Many critics have denounced Gurdjieff as a charlatan. His influence was primarily limited to artists and writers; Kate Bush is one of the most prominent artists to have been influenced by his work. Many organisations based on his teachings continue to run today, his work kept alive by his former pupils. The most important book on his teachings is Beelzebub’s Tales to His Grandson, which was published in 1950.

George Gurdjieff married Julia Ostrowska, a Polish woman, in 1912. His wife died of cancer and many blame her and the deaths of others on the treatments Gurdjieff performed on them. Although he did not officially recognise any children, it is believed that Gurdjieff fathered seven children with seven different women. He died in France on 29 October 1949. Today institutes are spreading his teachings operating in thirty countries worldwide.