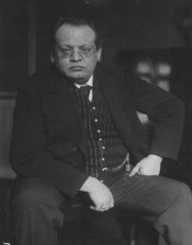 Johann Baptist Joseph Maximilian Max Reger was born on 19 March 1873, in Brand, Bavaria. His parents were Joseph and Philomena Reger. Joseph was a teacher in the village who taught many subjects. Max was the oldest surviving child, his younger sister Emma was next to survive, but three brothers after died. The family moved to Oberpfalz near Weiden in 1874. Max Reger was taught mathematics, and how to read and write by his parents since he was five. In 1882, he attended Royal Secondary School, where he had classical piano and organ lessons from Adalbert Lindner from 1884 for five years. In 1890, he had private lessons with Hugo Riemann, a theorist. When Hugo was employed at the Wiesbaden Conservatory, he enrolled there as a student, where Max eventually became Hugo’s teaching assistant.

Max Reger first recognized work was the Violin Sonata op. 1 that was written in 1890, it was dedicated to his teacher Hugo Riemann. Recognizing talent, Hugo got him a seven-year publishing contract with Augener of London. Max Reger first song was published in Chamber Music with his other works. Drei Chöre was his first three choral composition; it was published in Choral in 1892. When his tutor went to Leipzig in 1895, Max suffered a crisis. Max Reger had financial problems, topped with mental health issues, and he had to serve in the military for a year in 1896. Max Reger eventually had a strained relationship with his family, topped with depression and bout of alcoholism as he fights for his job as a composer.

Max Reger met Karl Straube in 1897, who was interested in Max’s composing work. Karl was an organ virtuoso, and Max’s technically difficult organ works propelled him to certain fame. Due to his deteriorating health, Max Reger returned home in 1898 to his parents in Weiden. There he wrote Hymne a den Gesang, and many more. In September 1901, Max Reger and his family moved to Munich to perform in concerts, where he appeared in concerts as organist, pianist, and accompanist performing in his songs. He managed to build up a reputation as a performer and composer. Max Reger was appointed as Josef Rheinberger's successor at the Akademie der Tonkunst in 1904, where he also taught composition and organ as his predecessor did. He resigned a year later, wearied by the conservatism at the school, and disagreements with the other staff members.

Max Reger moved onto Leipzig University Church in 1907 and moved onto a role as professor and university musical director at the Royal Conservatory in Leipzig a year after. He resigned as director but remained a professor until his death. Experiencing criticism at his premiere of the Piano Concerto with Kwast-Hodapp and the Gewandhaus Orchestra, Max left Leipzig in late 1911. He became the royal conductor or the Kapellmeister to the Meiningen Court Orchestra. There, Max Reger refashioned the group back into its former glory, while trying out his orchestration ideas during practice.

Max Reger worked as a conductor until 1914, where he quit after suffering from a nervous breakdown during a concert at the Court Orchestra. After his job as a royal conductor, Max and his family moved to Jena. Jena was where he composed the Hebbel Requiem. Max Reger continued to teach in Leipzig. Fueled by World War 1, he composed more patriotic works, including the Vaterländische Ouvertüre op. 140 and the Fantasy and Fugue.

Max Reger met and courted Elsa von Bercken who first rejected him, but later married him in 1902. Elsa was a divorced Protestant aristocrat; their marriage caused him to be excommunicated from the Catholic Church. The couple adopted two children.

Max Reger died in a hotel in Leipzig on 11 May 1916, of a heart attack. His work Acht geistliche Gesänge was beside him when he passed away. Max Reger was forty- three, he was buried at Munich Waldfriedhof, Munich, Germany.