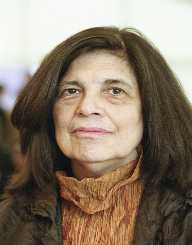 Intellectual, novelist, filmmaker, and essayist Susan Sontag was born Susan Rosenblatt on the 16 January 1933 in New York City. Her parents were Jack and Mildred Rosenblatt and she had one sibling, a sister Judith. Her father’s line of business, a fur trader, meant that Sontag spent time with her grandparents in New York City while her parents were working out of the country.

When her father died in 1938 when she was five, Sontag, her mother and sister moved to Miami, Florida, then Tucson, Arizona before settling in Los Angeles, California.  Her mother remarried, to an army captain Nathan Sontag, and her daughters adopted their step-father’s surname.

During her time in Europe, Sontag became part of the expatriate American community involved with the Paris Review. She met influential literary figures such as Alfred Chester and Robert Silvers and studied French writing, philosophy, and filmmaking. Returning to America in 1958, she obtained a divorce from Rief and moved into a small apartment in New York with her six-year-old son. She did editorial work to support herself and had her first novel The Benefactor published in 1963.

Sontag was bisexual, although she never spoke about it publically. She was married to Philip Rieff (1950-1959), and they had one child, a son David (b.1952).  David also became a writer and wrote a memoir, Swimming in a Sea of Death: A Son’s Memoir (2008). Later in life, Sontag was in a relationship with the photographer Annie Leibovitz.

Susan Sontag died on the 28 December 2004. She was 71 years old and is buried in Montparnasse Cemetery in Paris, France.