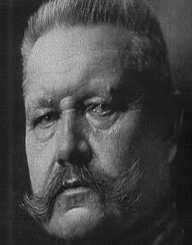 Paul von Hindenburg was born on the 2 October 1847 in Posen, Prussia, which is today Poznan in Poland.

Paul von Hindenburg's first posting was serving as a page to the widow of King Frederick William IV of Prussia. During the Austro-Prussia War (1866), he saw action at the Battle of Koniggratz and was injured when a bullet hit his helmet, he continued in his position and earned a medal for bravery. He also saw action in the Franco-Prussian War (1870-1871). He represented his regiment when the German Empire was proclaimed on the 18 January 1871 at the Palace of Versailles.

When the First World War broke out in 1914, Paul von Hindenburg was called up and sent to the Eastern Front. The Germany Army was victorious over the Russians at Tannenburg (1914) and the Masaurian Lakes (1915). He was promoted to Field Marshall on the 29 August 1916, and he was appointed Chief of Staff of the German Army.

Von Hindenburg then formed the Third Supreme Command with other senior military officers and industrialists which held power until the 29 September 1918. He then retired from the Army in October 1918 and settled into retirement. Friedrich Ebert died in February 1924, and Hindenburg was lobbied by former military friends and associates to run for the presidency. They were keen for him to run because they opposed the Catholic Centre Party as well as the Socialist Democratic Party. Hindenburg reluctantly agreed and was backed by the country’s four main right-wing parties.

Paul von Hindenburg became President of the Weimer Republic in 1925. His son, Major Oskar von Hindenburg (b.1883-d.1960) was his father’s aide-de-camp. He was said to be his father’s closest advisor and confidant. It was a time of political turmoil and unrest in Germany with an economic depression as the country suffered under the punitive aspects of the Treaty of Versailles.

Hindenburg was popular with the general public and was re-elected in 1932. Then in January 1933, he appointed Adolf Hitler Chancellor of Germany. Von Hindenburg died in 1934, and it was only after his death that Hitler dismantled constitution government.

At the time of his death in 1934, newspapers in the United Kingdom wrote that the handing over of the German Republic to Adolf Hitler was one of the greatest betrayals of the age.

Paul von Hindenburg's wife was Gertrud von Hindenburg, and they had three children. Son Oscar and two daughters, Annemarie and Irmengard. Von Hindenburg died on the 2 August 1934. He had had lung cancer.