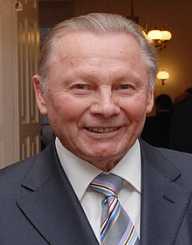 A three-time former Prime Minister of Slovakia, Vladimir Meciar is a politician who was instrumental in the formation of Slovakia as an independent country. But during his three terms as the Prime Minister, he led a chaotic government. His governance has been termed as autocratic, filled with corruption, and several other issues like organized crime, which did a lot of damage to his reputation in the public eyes.

Vladimir Meciar became one of the most hated politicians in his country. He was also responsible for generating tension between Hungary and Slovakia due to his schemes & policies. Although he is credited with making Slovakia an independent nation, he has been arrested for kidnapping. He has currently retired from the political career, after failing to win several elections.

Vladimir Meciar was born on July 26, 1942. His birthplace is Zvolen, Czechoslovakia and his star sign is Leo. His father was a tailor, and his mother Anna was a housewife. His parents had four children together – all boys, Meciar was the eldest. Meciar comes from a humble background, and their economic condition of his family was evidence.

Not much is known about Vladimir Meciar's primary education, but that he graduated in 1959. In college, he was also interested in amateur boxing and appeared in several matches.

After graduating from school, Vladimir Meciar at an early age of 18, worked as a clerk at a political firm. This brought him into connections with several politicians, and he became affiliated with the Communist Party of Slovakia.

Vladimir Meciar was removed from the Communist Party in 1969 and was driven out of the politics. For the next 20 years, he did not take up any political activities. Instead, he worked in a steel factory and studied law. He graduated from law school in 1973 and started working as a lawyer. After working for nearly 14 years as a lawyer, Meciar once again became active in politics.

The year 1990 saw Vladimir Meciar rise to power when he became Slovakia’s Minister of interior and environment. In the same year, his party won in the Slovakia and elections, and Meciar was elected the Prime Minister of Slovakia for the first time. Soon allegations of corruption began to rise amidst problems of unemployment and crime rate rising.

Vladimir Meciar lost his position as the Prime Minister in the year 1991 itself. The following year, however, he ran again for the Prime Minister’s position and became successfully elected. This was the time when he negotiated for Slovakia to become an independent country from the Czech Republic.

In 1994, however, Vladimir Meciar was removed from the post of the Prime Minister once more. But the next elections once again saw him rise to power. For the next four years, Meciar continued to serve as the Prime Minister. However, his popularity began to fall drastically, and he became infamous for his connections to organized crime.

After the 1998 elections, in which Vladimir Meciar lost, he campaigned several times, but every time he lost the elections. In 2000, he gave up politics, and to his surprise, most of the country was relieved at this decision.

Vladimir Meciar was arrested in the year 2000 in a case of kidnapping – the kidnapping was of the then Slovak President Michael Kovac’s son.

Vladimir Meciar married Margarita Meciar who is a doctor. With her, he has four children.