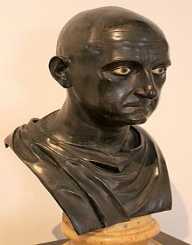 Publius Cornelius Scipio Africanus was one of the most successful Roman generals of his time. Also, Scipio was born in the year 236 B.C. as a member of the patrician family. After his father’s death in battle, he took up the leadership of his military. The role gave him the opportunity to prove his talent in strategy in military war plans. Also, history has bestowed upon him the same honors of being the best general of all time. This is because, during his time as a general in the Roman military, Scipio showed a great deal of ingenuity with his plans.

Scipio realized some of his greatest achievements during the Second Punic War. In this war, he dealt a winning blow to his opponent Hannibal at the last Battle of Zama. On his previous achievements, he managed to conquer modern Tunisia back in the day. Some of his peers were jealous of his accomplishments in wars. Therefore, they fixed fake charges against him. Consequently, they ordered his trial for treason and bribery. After realizing how stupid the charges against him were, he left. Scipio retired from public life. Moreover, the charges were filed to lower his station in the public eye. Scipio died in the year 183 B.C. in Liternum.

Publius Cornelius Scipio was born in the year 236 B.C. to a ruling military family in Rome. After the death of his father who was also a general, he took up the mantle. Also, since he was from a long line of ruling military families, he was able to fit his father’s shoes just fine. Moreover, he was from one of the patrician families of Rome. Later in life, he would become one of Rome's greatest Generals ever to grace a battlefield.

Consequently, in a daring move, he went ahead to charge at the surrounding forces.  At one point in his career, he had that some of the military leaders were planning to abandon Rome. So, he went there in rage and made all of the swear allegiances to Rome. Later he vied for the candidacy of aedilius curulis. However, he had reached the age for the position. Many of the Tribune members did not want him to contend. Despite all that, he went ahead and won the elections unanimously. So, the Tribune had to support his position.

Sometime in the year 211 BC, the brother of Hannibal's soldiers killed Scipio's father in the war. The father was there with one of Scipio's uncles. So, at the election of the Proconsul, he vied for the position to go to war with Hannibal's brother. Moreover, at the time there was no Roman who would dare to fight with them. At the time of the duty, Scipio was only 25 years of age. So, he was given the responsibility to go to handle Hannibal's brother. Besides, most of the leaders saw the move as sure suicide.

Upon his arrival in Carthage, he made a surprise move to capture the New Carthage capital. This was the central administration to the Carthage's power. It was a good strategic place to hold. Therefore, it would be an excellent place to operate all military operations. Scipio was more liberal towards the prisoners of war and showed them mercy.

Consequently, they saw him more of a liberator than an oppressor. He also helped one lady who had been captured his troops. So, he made arrangements for returning the lady to her betrothed. This acts helped him gain favors from the local chieftains for supplies and reinforcements. Soon he got to fight the armies and won.

At this point, there was little of the Carthaginian army that was left. So, they made the offer to open diplomatic negotiations. During the same time, Hannibal's army came back home. Therefore, they stopped all talks. The command that Hannibal came home with was not much to speak off. They were tired of war, and most of them were forced into service all the way from Italy. The two mighty generals fought it out in the plains between Carthage. This was the defining Battle of Zama. So, they fought and due to Scipio’s skills and talent he won.

After winning the war against Carthage and bringing it under the rule of Rome, Scipio bid war the life of war goodbye. So, he went back home where he received a hero's welcome. Scipio did not take up the many offers in honors that the people offered him. Scipio won an election to be a Censor later in life in the year 199 BC. He served in that capacity for some years then retired to a quiet life of no politics.

After retiring to his country seat at Liternum along the coast of Campania, Scipio lived there for the rest of his life. Scipio life came to an end in the year 183 BC. At the time of his death, Scipio was only 53 years of age. Some believe that Scipio might have taken his own life due to reasons that are unknown. Scipio's arch-rival Hannibal also died on the same year in Bithynia where he was in exile.