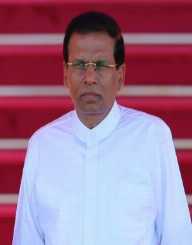 Maithripala Sirisena was born on September 3, 1951, Sri Lanka. His father was Albert Sirisena.

As a youth, Maithripala Sirisena attended the Laksha Uyana school for some time before later attending the Thopawewa Maha Vidyalaya. As a teenager (and while still in school) he joined the Sri Lanka Freedom Party’s Youth League (SLFP). He was later arrested for his involvement in the group in 1971 when he was only 20 years old.

For his college education, he first attended the Royal College in Polonnaruwa. Later, he transferred to the Sri Lanka School of Agriculture. He stayed here for several years before graduating in 1973. He later continued his education at the Maxim Gorky Literature Institute in Russia. He studied there until he graduated in 1980.

In 1983, Maithripala Sirisena was still apart of the SLFP. As he was about 30 at this point, he served as the president of the All Island section of the group, instead of participating as simply a member of the group. He then stayed with this organization as the president for some time.

In 1989, Maithripala Sirisena ran in this first election for the SLFP party. We won this election and became a member of the Sri Lankan parliament.

In 1994, another election took place for parliament seats. Maithripala Sirisena ran again, but this time he was a member of not the SLFP, but the People’s Alliance, which was a new political party which formed in the same year (this political party is now known as the United People’s Freedom Alliance). He won the election, keeping his seat. Later in the same year, he was also made a Deputy Minister for Irrigation.

In 1997, Maithripala Sirisena had it in good with the President of Sri Lanka at the time, Chandrika Kumaratunga. In this year, he was made both a Cabinet member for the president and made the Minister of Mahaweli Development.

The 2000’s were also a prosperous time for Sirisena. In 2000, he was elected to be the Chairman of the SLFP. In 2001, he was made General Secretary of the SLFP. He stayed in this position until 2014 but took on other jobs while also working here at the same time. In 2004, he also was one of the people who changed the People’s Alliance into the United People’s Freedom Alliance. Three years later, he became the Cabinet Minister for Agricultural Development and Agrarian Services Development.

The 2010’s were also a great time, and continue to be wonderful, for Maithripala Sirisena. In 2010 he became the Minister of Health. Four years later, he was one of the health ministers who was chosen to be vice president (there were four vice presidents) for WHO World Health Assembly. In the same year, he announced that he would be running for president of Sri Lanka in 2015.

In 2015, Maithripala Sirisena held onto his promise of running for president. He won the election and was inaugurated in early 2015. By winning he succeeded long-time president Mahinda Rajapaksa. Like most of the Sri Lankan presidents before him, it is likely that he will be president for about ten years.

Maithripala Sirisena is married to Jayanthi Pushpa Kumari. Together, the couple has three children: Chathurika, Daham, and Dharani.