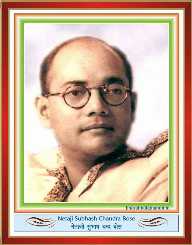 Subhas Chandra Bose joined the Mission School at the age of five in 1902 and studied in that school for seven years up to 1909. Later moved to Ravenshaw Collegiate School. Subhas Chandra Bose was a brilliant student throughout his academic career and a genius. He completed his matriculation in1913 by being a topper and secured the second position.

He was a patriotic student leader.

Subhas Chandra Bose joined the Scottish Church College, the University of Calcutta in 1918 after a brief study at the Presidency College, for his B.A in Philosophy. In keeping with his promise to his father, Janakinath Bose, Subhas Chandra Bose went to London to complete the Indian Civil Service Examination in 1919. He finished the Civil service examination with flying colours and ranked fourth

Subhas Chandra Bose was very much influenced by the teachings of Swami Vivekananda and Bhagavad Geetha. Subhas Chandra Bose did not want to serve under the British rule as it was opposed to his ideology of freedom. Therefore he resigned from the Civil Service.  He returned to India in 1921 to give a clarion call for Independent India. It was during this period there was political turmoil in India and Europe.  He visited Germany and Japan to seek help from them for independent India. He strongly opposed the Dominionship for India instead he wanted complete independence for India. During the civil disobedience in 1930, he was sent to prison and released in 1931.

Mahatma Gandhi was leading India for independence by peaceful means. Subhas Chandra Bose formed centers in Europe to establish political and cultural ties between India and Europe. During this period there was a ban on him for his return to India for his involvement with Germany and Japan.  He defied this ban and returned to India, and he was jailed for a year. He joined the Congress but had to resign for differences with Mahatma Gandhi and his supporters. He formed the Indian National Army in 1943 staying in Singapore.  He solicited financial support from Indians for realizing his goal for an independent India.

The Indian National Army had to be disbanded after the Japanese surrendered in the World War II. He was a well-known figure as a patriot and a freedom fighter in the struggle for independent India.

Subhas Chandra Bose was running a newspaper and also the editor of another paper that was published at that time. The International Airport at Kolkata has been named after him.

Bose married Ms.Emile Schenki, an Austrian in 1937 and had a girl child, Anitha Bose Pfaff in 1942.

Subhas Chandra Bose was arrested in 1925 and sent to prison in Mandalay, where he contracted tuberculosis.

Subhas Chandra Bose is believed to have died in an air crash in Taiwan on 18th August 1945.