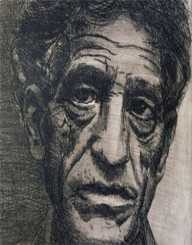 Swiss sculptor, painter, and printmaker Alberto Giacometti was born on the 10 October 1901 in Borgonovo, Switzerland, the son of the Post-Impressionist painter Giovanni Giacometti and Annetta Stampa. He was born into an artistic family and related to the Symbolist painter Augusto Giacometti, who was a second cousin of both his parents.

His brother Bruno became an important Swizz architect in post-World War II, and his brother Diego also became a sculptor as well as a designer. His godfather was Fauvist, Cuno Amiet. As a child, he used to draw for his godfather, and some of these drawings are still in existence.

In 1922, Alberto Giacometti relocated to Paris, France to study sculpture. He used to take classes at the Academie de la Grande Chaumiere with Antoine Bourdelle. He exhibited his work at the Salon des Tuileries for the first time in 1925. His younger brother Diego began sharing a studio with him in 1927. The same year Giacometti exhibited The Couple and Spoon Woman at the Salon des Tuileries. In 1929, he was introduced to Andre Masson, and the Surrealist circle and critics became aware and supportive of his work. These critics included Carl Einstein.

Alberto Giacometti signed a contract for twelve months with Pierre Loeb’s Galerie Pierre, and the first bronze casts of his works were done. The writer Michael Leiris reviewed his work in the journal Documents, and from 1930, Giacometti started making decorative art objects for designers. He also became active Andre Breton’s group of Surrealists. Giacometti held his first solo exhibition at the Galerie Pierre Colle in Paris (1932) and his first American solo exhibition at the Julien Levy Gallery in New York (1934).

It was around the mid-1930s that Alberto Giacometti became friends with Pablo Picasso, Jean-Paul Sartre, and Simone de Beauvoir. During World War II, he moved to Geneva, Switzerland (1942). He returned to Paris after the war where he once again became involved with the artistic and literary community. He painted a number of portraits of leading figures of the day, including one of Simone de Beauvoir (1946).

The Tate Gallery, London acquired Man Pointing in 1949, his first work to be exhibited in a European museum. The year 1951 saw his first exhibition at the Galerie Maeght, Paris.  He held subsequent exhibitions in 1954, 1957 and 1961. The Musee de Grenoble acquired The Cage.  During the 1960s, he continued exhibiting around the world including New York, Santa Barbra, California; Japan and Europe. Retrospectives of his work were held at the Museum of Modern Art in New York City as well as the Tate Gallery in London.

Alberto Giacometti won a number of prestigious awards including the Sculpture Prize (1961), the Carnegie International in Pittsburgh and the Grand Prize for Sculpture (1962) at the Venice Biennale. He was awarded the Guggenheim International Award for Painting (1964). The French government presented him with the Grand Prix National des Arts in 1965. And in the mid-1960s, exhibitions of his work were held at the Museum of Modern Art, New York; the Tate Gallery, Humlebaek in Denmark and the Stedelijk Museum in Amsterdam.

Living in Switzerland during World War II, Alberto Giacometti met Annette Arm, who was working for the Red Cross. The couple married in 1949. He frequently used his wife as a model. Alberto Giacometti died on the 11 January 1966 of heart failure.