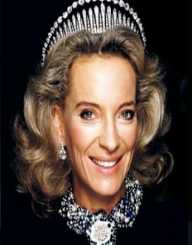 Princess Michael of Kent was born on 15 January 1945, in Karlsbad, Czech Republic. Princess Michael’s father was Baron Günther Hubertus von Reibnitz, and her mother was Maria-Anna-Carolina-Franziska-Walpurga-Bernadett. Her mother was the descendant of Diane de Poitiers among others like the famous painter, Peter Paul Rubens. Her parents divorced having her father settle in Maforga, Mozambique as she moved with her mother and brother to Australia where she started a beauty salon.

During the coronation of King Mswati III of Swaziland, Princess Michael and her husband represented the Queen. They also forwarded their representation during the Belize independence celebrations. Princess Michael supports her husband in his charitable works and organizations. Her husband has never benefited from a parliamentary annuity and the Privy Purse.

In 2007, Princess Michael went back to her initial career as an interior designer and consultant. This has seen the revival of her firm ‘Szapar Designs. She is also a consultant for the Swiss art gallery.

Princess Michael has also been involved in writings of novels. Her debut non-fiction book was the 1986 ‘Crowned in a Far Country: Eight Royal Brides.’ She has also published two non-fictional books that involve the history of five royal mistresses, and another about one of her ancestors.

Her writing was extended to the 2013 historical novels, which included The Queen of Four Kingdoms’ and the 2014 'Agnès Sorel: Mistress of Beauty'.

In 1978, Princess Michael became the first cousin to Queen Elizabeth II by marriage. This ultimately translated to her assuming the role and title of HRH Princess Michael of Kent. In that line, she and her husband represent the Queen at events.

Princess Michael of Kent has been a good observer of Roman Catholic faith. She has attended several Catholic events.

Princess Michael of Kent was in 2004 reported having racial sentiments to black diners. In 2005, while speaking to the News of the World published, she is said to have stated Diana, Princess of Wales, was a bitter and nasty lady while Charles, Prince of Wales, was jealous because his first wife was more popular. In 2014, she was also quoted saying that the Royal Family was a boring old generation.

Princess Michael of Kent’s husband has never benefited from a parliamentary annuity and the Privy Purse since he is not in the succession line as he forfeits it through Catholicism. They, however, fund charitable causes since her husband runs a consultancy. They were blessed with a son, Lord Frederick Windsor, and a daughter, Gabriella Windsor who have retained the succession right since they are in communion with the ‘Church of England.’