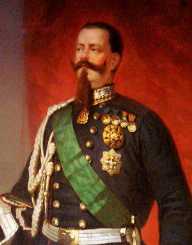 Victor Emmanuel was the son of Charles Albert, Prince of Carignano and Maria Theresa of Austria. In 1831, when his father became King of Sardinia-Piedmont and Victor Emmanuel became the Duke of Savoy.

Victor Emmanuel was involved in the First Italian War of Independence (1848-1849) and was present at the battles of Santa Lucia, Goito, Custoza, and Pastrengo alongside his father, King Charles Albert. After a military defeat by the Austrians at the Battle of Novara, the king abdicated, and Victor Emmanuel became King of Sardinia-Piedmont (1849).

Peace with Austria was successfully negotiated in 1849,  a revolt in Genoa was suppressed and Victor Emmanuel appointed Count Camillo Benso of Cavour Prime Minister of Piedmont-Sardinia in and suppressed the Republicans. Victor Emmanuel fought at the battles of Magenta and Solferino. He was also involved in Garibaldi’s conquest of Naples and Sicily, but when he led his army into the papal territory, Pius IX excommunicated him from the Catholic Church.

In 1861, Victor Emmanuel was crowned King of Italy. He was an important figure in the unification of Italy and the fight to free the country from foreign control. After his attempt to acquire the Papal States, Victor Emmanuel was excommunicated from the Catholic Church. Later on, he was accepted back into the church and received the last rites before his death on January 9, 1878. His son Umberto (1844-1900) succeeded him and in 1900, Umberto I was killed by an assassin.

Apart from his legal marriages, Victor Emmanuel had various mistresses and a number of other children by them.