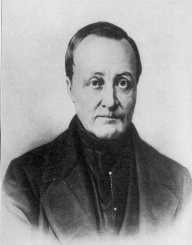 French philosopher and founder of sociology and positivism Auguste Comte was born in Montpellier, France on the 19 January 1798. He was the son of Louis Comte and Rosalie Boyer. His parents were royalists and Roman Catholic, but Comte rejected both as a young man

Auguste Comte was a pupil at the Lycee Joffre before enrolling at the University of Montpellier He then studied at the Ecole Polytechnique in Paris, France.

In 1816 Auguste Comte began living in Paris, France on a permanent basis. He supported himself by teaching mathematics and journalism. At the same time, he was beginning to develop ideas about the history of human society.

By 1826 Auguste Comte had formulated his ideas in what became known as his system of positive philosophy. He had a nervous breakdown but by early 1829 was well enough to recommence giving lectures on his philosophy and ideas. The course that Auguste Comte taught was published in six volumes (1820-1842). Between 1832 and 1842 he worked as both a tutor and an examiner at the Ecole Polytechnique in Paris.

He left the Ecole Polytechnique in 1842 and began work on his four-volume System of Positive Policy, his major work on sociology.

Major publications include The Course on Positive Philosophy, Discourse on the Positive Spirit, A General View of Positivism and Religion of Humanity.

Auguste Comte married Caroline Massin in 1825 and helped him through his nervous breakdown early in their marriage. The couple separated in 1842 and the mid-1840s, he had a romantic relationship with Clotilde de Vaux who died of tuberculosis in 1846.

Auguste Comte died of cancer on the 5 September 1857.