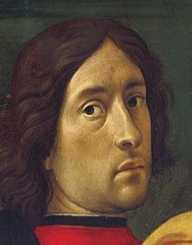 Domenico di Tommaso Curradi di DoffoBigordi was born 2nd June 1448 in Florence, Italy. Ghirlandaio was the oldest of six children, but only he and two of his brothers survived to be adults.

He then served as an apprentice with Andrea del Verrocchio based in Florence.

Ghirlandaio started his work in Florence, Rome, and Tuscany. He painted frescoes in his early career. One of his first commissions was to paint the Chapel of Santa Fina in the Collegiate Church. He completed the work during 1477 and 1478.

His friend, Botticelli, painted Saint Augustine in His Study at the Church of Ognissanti in Florence. In 1480, Ghirlandaio painted a piece to match, titled, St. Jerome in His Study.

He then began work in 1481 for the Palazzo Vecchio. He didn't complete his frescoes until 1485 due to a commission he received from the Pope. The Pope called him to Rome in 1481. Pope Sixtus IV commissioned a group of painters, of which Ghirlandaio was one. They painted several frescoes of the popes and scenes from both the Old and New Testaments of the Bible. The painters decorated the walls of the Sistine Chapel.

From 1482 to 1485, a banker commissioned Ghirlandaio. He did several frescoes showing scenes from the life of Saint Francis of Assisi. In 1483, Ghirlandaio saw an oil painting for the first time. The people looked very realistic which amazed him. In 1485, he painted the altarpiece in the Sassetti Chapel. The painting is still there today, along with his frescoes of St. Francis.

Ghirlandaio continued to paint over the next ten years, completing many commissions. He also trained Michelangelo and Francesco Granacci.

Ghirlandaio contracted fever and he died in 1494.

He married twice and had six children.