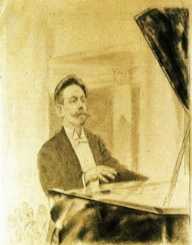 Aleksandr Scriabin was born on January 6th, 1872. His place of birth was on Moscow in Russia. He was the son of Nikolai Scriabin and Lyubov Petrovna. His father was a distinguished diplomat and a lawyer. He was also a wealthy aristocrat. His mother, on the other hand, was a skilled pianist. Sadly, she succumbed to tuberculosis when her son Scriabin was still a baby. He was only one year old. His aunt was aunt Lyubov. She was a great pianist just like Scriabin’s mother. She therefore greatly influenced Scriabin in playing it too.

Aleksandr Scriabin was still quite young when he learned the piano under Nikolai Zverev. He had a desire to join the army but his short stature could not allow him. He was hardly five foot tall. He joined the Moscow Cadet corps in 1882. While there, he played the piano and took more piano lessons as well. In 1882, he enrolled in the Moscow Conservatory. Taneyev taught Aleksandr Scriabin composition. On the other hand he further learnt how to play the piano by Safonov. He later graduated in 1892.

In 1894, Aleksandr Scriabin officially launched his career in a concert in St. Petersburg. In this year, he also composed for a publishing company Mitrofan Petrovich Belyayev.

In 1898, he held another concert in Paris. The concert was quite a success. In the same year, he took a job at the Moscow Conservatory as a teacher. He quit his job at the conservatory later in 1903 following a sex scandal. In the fall of 1904, Aleksandr Scriabin settled in Switzerland where he devoted all his time to his compositions. For the next six years, he also traveled to many other countries where he gave his concerts. These included: France, Italy, the U.S, and Belgium.

Aleksandr Scriabin was a womanizer all his life. Even as a married man he still had affairs with other women. He was also involved with underage girls and supposedly, he raped them at times. In 1903 for instance, he was accused of getting involved in a sexual relationship with an underage girl. He was a teacher at the conservatory at the time.

He married his first wife, Vera Isakovich in1897. The couple was blessed with three daughters and a son. Unfortunately, they lost their firstborn daughter later then their son. In 1904, they divorced. Aleksandr Scriabin then took Tatiana Schloezer initially as his mistress and later married her. Together they had two daughters and a son

Aleksandr Scriabin succumbed to septicemia on 13 April 1915. He was 43 years old at the time of his death.