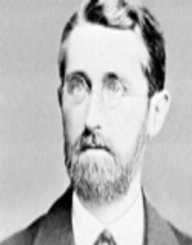 Felix Christian Klein was born on April 25, 1849, in Dusseldorf, Germany. His parents were Sophie Elise (Kayser) and Caspar Klein.

As a teenager, Felix Christian Klein attended the Gymnasium in his hometown. After finishing his studies at this school, he went on to attend the University of Bonn, beginning in 1865. He first attended the school to study physics. However, he changed his field of study to mathematics once he started working with the mathematician, Julius Plucker. He attended the same university for several years, graduating in 1868.

Shortly after graduating, Klein’s friend and mentor, Plucker, died. He left behind several unfinished mathematics projects and research material. Felix Christian Klein promised himself that he would one day continue Plucker’s research, but he didn’t have the time or money to focus on it right after school. Instead, he took on a job as a hospital orderly, which he kept until 1871.

In 1871, he earned a job as a mathematics lecturer at the University of Gottingen. There, he met another acclaimed mathematician, Alfred Clebsch, who he later worked with. In 1871, Felix Christian Klein was promoted to be a professor at the same university. It was while here that he resumed his mathematics research. Some of the research he did was picked up from where Plucker left off, but some were also original. He worked mostly in the field of geometry. He didn’t work alone, though; he worked with another great mathematician, Sophus Lie. Also while at this university, he published several papers on non-Euclidean geometry, functional theory, and algebra.

In 1875, he left his job at Gottingen and began working at the Technische Hochschule. He worked here from 1875 to 1880. In 1800, he switched universities again, this time settling at the University of Leipzig.

Felix Christian Klein switched schools once more in 1886 when he worked at the University of Gottingen. Here, he helped to set up both a mathematics research center and a mathematics library. Felix Christian Klein also taught both math and science. In the early 1900’s, he also helped to modernize the way mathematics is taught, especially in secondary schools. He was one of the advocates for teaching harder mathematical properties, like Calculus, earlier on in schools. He stayed at this school until he retired, in 1913.

After Klein’s retirement from teaching at a university, he continued to tutor and research from the comfort of his own home.

Felix Christian Klein published dozens of papers and other materials during his life, most all of them having to do with mathematics. Some of his most famous works are listed below.

Felix Christian Klein died on June 22, 1925, in Gottingen, Germany. He was 76 years old when he passed away.