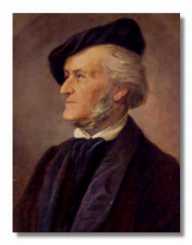 Richard Wagner was born on May 22nd, 1813. His place of birth was in Leipzig, Germany. He is famous for being a theatre director and a talented German composer. Throughout his career, he influenced many of his remarkable operas. One of these operas was the 18-hour Ring Cycle.

His interest in music grew from the fact that his family background was also inclined to music. In spite of the success that he enjoyed, he was also faced with numerous controversies. This included his embarrassing love affairs. Part of his compositions also involved themes that were contrary to popular beliefs.

Richard Wagner was born on May 22nd, 1813. His mother’s name was called Johanna Rosine. She was the daughter of a baker. On the other hand, his father was named Carl Friedrich Wagner. He worked as a police service clerk. Young Wagner lost his father when he was only six months old. Wagner was the ninth born child of his parents.

After the death of his father, his mother went on to have an affair with Ludwig Geyer. It was not until Wagner was 14 years that he understood his father was not Geyer and that Carl was his biological father. Nonetheless, Geyer had a profound influence on his career life because he was a painter. He also wrote poems and acted in theaters.

From his stepfather’s experience in theaters, Richard Wagner grew with the dream of one day performing in large theaters. Apart from his Geyer, Wagner’s sisters were opera singers. This meant that influence was all around him. This largely contributed to his opera career, and he began honing his skills from a tender age.

Richard Wagner began taking piano lessons in 1820 after his father took him to Pastor Wetzel’s school located in Possendorf. The following year, tragedy stroke his family as Geyer passed away. After this, he went to a boarding school named Kreuzschule. While studying at this institution, he developed the passion for a playwright. In his teens, he managed to come up with his first composition called Leubald. This was a tragic play.

Years later, Wagner was much inspired by Wilhelmine Schröder-Devrient to bring in both drama and music in opera compositions. This occurred after her performance in 1829. Two years later, Wagner enrolled with the University of Leipzig where Thomaskantor Theodor Weinlig taught him.

In 1833, with the help of his brother Albert, Richard Wagner became a choirmaster. During the same year, he composed Die Feen - The Fairies. This was his first opera composition. Sadly, his first work was not staged. Wagner later became the musical director of the opera house he was working in. This was the only way he could achieve professional growth in his career.

While working as a director in 1834, he composed Das Liebesverbot - The Ban on Love. This work was staged two years later in Magdeburg. Unfortunately, the theatre closed before he had made his second performance for the work. This devastated him as he was left bankrupt at the time.

During this terrible period in his career, Richard Wagner was aided by Christine Wilhelmine, an actress whom he had fallen for. She helped Wagner in making necessary introductions to Konigsberg theatre. The two tied the knot in late 1836. Their marriage was short-lived as it ended after six months. Christine abandoned him for another more prosperous man.

Shortly after, Wagner went on to work in Riga as a music director for one of the local operas. Around this period, he got engaged to Christine’s sister, and in 1838, he was back into a relationship with Christine yet again. A year later, the duo had numerous debts that they had to flee from Riga.

By 1840, Richard Wagner had completed an opera called Rienzi. This followed with his departure to his homeland, Germany promising never to leave again. Rienzi was well received as it was a success. However, in 1845, his breakthrough came after completing Tannhäuser. Soon, he got an appointment to work as a Royal Saxon Court Conductor. His next work came a year later in 1846, Lohengrin.

While venturing into politics, he had a different stand which affected people’s perceptions towards him. It was during his political inclination that he wrote the hostile Jewishness in Music and other works which criticized the Jews. He also went ahead to write Opera and Drama before working on what would be identified as one of his best works, i.e., Ring Cycle. This work was unique as it combined 4 different operas into one.

Richard Wagner passed away on February 13th, 1883. He was 69 years old at the time of his death. He had suffered a heart attack which led to his death.