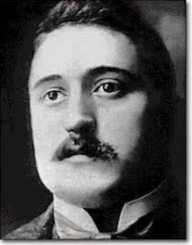 Guillaume Apollinaire was a French poet, novelist, art critic, and playwright. Born on August 26, 1880, he was one of the leading poets of the 20th century and played an instrumental role in the avant-garde movement of the time.

Despite his relatively short lifespan, his contribution to the French literary circle was immense, including creating the terms Cubism in 1911, Orphism in 1912, and Surrealism in 1917. His work, The Beast of Tiresias, 1917, was adopted for the opera Les mamelles de Tiresias in 1947. As an art critic, he worked for Le Matin, Paris Journal, Mercure de France, and L’Intransigeant. He also co-founded the artistic and literary magazine Les Soirees de Paris in 1912.

At the age of 20, he left for Paris, where he adopted the name, Guillaume Apollinaire. In 1901, he spent some months in Germany, and that was when he realized he wanted to become a poet. His love for Rhineland, the beauty of its forest and legends, would be captured in his later poems.

On his return to Paris, Guillaume Apollinaire joined the artistic community in Paris, and his influence would make him famous writers of the time. He became friends and collaborated with the likes of Pablo Picasso, Max Jacob, Gertrude Stein, Jean Cocteau, and Michael Duchamp among several others.

In 1910, Jean Metzinger’s portrait of Apollinaire became the first cubist portrait, as the poet in his Vie anecdotique, 1911, noted he was privileged to be the first model of a cubist painter. That same year, he joined a branch of the Cubist movement called Puteaux Group, which later became Section d’Or.

In 1909, he released the collection of poetry, L'enchanteur pourrissant, (“The Rotting Magician”) but it took the collection Alcools in 1913, to establish his reputation as an astute poet. The poems partly influenced by the Symbolists try to relate the past and present, by linking the traditional poetic forms with modern imagery. That same year, he published his essay Les Peintres Cubites, Meditations, Esthetiques on the Cubist painters.

Guillaume Apollinaire coined the terms Cubism, Orphism, and Surrealism. He used cubism, coined in 1911 to describe a system that did not restrict expressions and talent. He named Pablo Picasso, Jean Metzinger, Henri Le Fauconnier, and George Braque as the forerunners of Cubism. Apollinaire coined Orphism in 1912 at the Salon de la Section d’Or, to refer to works by František Kupka and Robert Delaunay.

He described it in Les Peintres Cubistes, Méditations Esthétiques, 1913, as "an art of painting new totalities with elements an artist creates by himself and not taken from visual reality.” Apollinaire first used the term Surrealism for the 1917 ballet, Parade. In his letter to Paul Dermee, he noted it was better to adopt surrealism than supernaturalism, becoming the first time the word was used.

World War I and Death

During World War I, Guillaume Apollinaire enlisted in the army during which he received severe shrapnel wound in 1916. While recovering from his injuries, he wrote, Les Mammelles de Tiresias and published the manifesto L'Esprit Nouveau et Les poètes. Apollinaire never fully recovered from his shrapnel wound, and his health deteriorated with time. He died of influenza on November 9, 1918 (aged 38), during the Spanish flu epidemic. He was buried at the Pere Lachaise Cemetery in Paris.