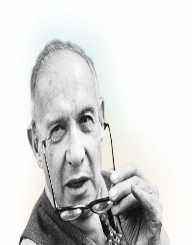 Peter Drucker was born on November 19, 1909, in Austria. His parents were  Caroline (Bond) and Adolf Drucker. He also had a younger brother named Gerhard.

As a child (and throughout his teenage years) Peter Drucker attended a school that was in part set up by a friend of his parents, Eugenia Schwarzwald. Schwarzwald was an intelligent social activist, and her social views greatly impacted both Drucker and his early education. After attending this school, he went on to study at the Dobling Gymnasium.

After he finished his formal education, he went on to apprentice at a cotton-import firm. However, he did not learn much about cotton here. Instead, he did mostly independent research, studying literature and other subjects by simply reading books. It was also around this time that his father began to keep him about law and writing journalism pieces.

Later, Peter Drucker went on to attend the University of Frankfurt. Here, he earned a Ph.D. in international and public law in 1931.

While still working on advancing his education, Peter Drucker began working for several newspapers, including the Frankfurter General-Anzeiger.

In 1933, Peter Drucker had moved to England because the Nazis were beginning to rise to power. While in England, Peter Drucker first worked at an insurance company, and later at a bank.

In 1937, Peter Drucker moved to the United States. Here, he first worked as freelance writer, writing for several newspapers such as Harper and the Washington Post.

In the late 1930’s, Peter Drucker began a career in academics. He first worked at Sarah Lawrence College where he taught economics.

In 1942, Peter Drucker began working at another college: Bennington College. Here we taught political science and philosophy. He stayed here until 1949. While working here, he also conducted interviews and analyzed the business methods of General Motors from 1943 to 1946. The work he did here would prove to change General Motors greatly, even though the company did not like the book (Concept of the Corporation) he wrote about his time at his company.

In 1950, Peter Drucker began working at New York University. He stayed here until 1791.

In 1971, he began working at Claremont Graduate University. Here, he taught social science. While here, he established a new MBA program at the school. He also worked to found the Drucker Archives at the same school, which were named after him. This was later renamed Drucker Institute. He worked here until 2002 but stayed involved with the school in other ways until his death.

While working at the various schools during his career, he also worked as a consultation for big-name companies like Coca-Cola and IBM.

While in England, Peter Drucker published his first full-length book in 1936: Die Judenfrage in Deutschland.  This book was later translated and sold with the name The End of Economic Man. While this book was famous in the United States and in’ many parts of Europe, it was one of the many books that were burned by the Nazis.

His second book was called The Future of the Industrial Man. It was published in 1942. This book would later prove to open doors for him, as it made him more famous and expanded his readership.

During his writing career, he also worked as a freelance writer for several magazines and newspapers around the world. Some of his articles as essays have been republished in books as a collection of his works.

Some of his other popular books are listed below.

The Essential Drucker
The Practice of Management
Men Ideas, and Politics
The Unseen Revolution: How Pension Fund Socialism
Managing Oneself

Most of Drucker’s awards are due to his writing and his teaching. Some of his most prestigious awards are listed below.

Order of the Sacred Treasure, 3rd Class (1966)
Grand Gold Decoration for Services to the Republic of Austria (1991)
Austrian Cross of Honor for Science and Art, 1st Class (1999)
Presidential Medal of Freedom (2002)
McKinsey Award (2004)
Peter Drucker had over 20 honorary degrees from universities and colleges all over the world.

Peter Drucker married Doris Schmitz. Together, the couple had four children. The marriage did not end until Drucker’s death.

Peter Drucker died on November 11, 2005, in Claremont, California, USA. He was 95 years old when he passed away.