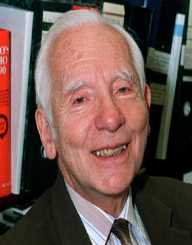 Jozef Rotblat was born in Warsaw, Russian Poland, on November 4, 1908. He came from a prosperous Jewish family. His father, Zygmunt, was the owner of a successful horse-drawn carriage business. During World War I, the family lost all its money.

Jozef Rotblat began his education in a cheder, a traditional Jewish school. He then studied electrical engineering at a technical school, graduating in 1923. He spent the next few years working as an electrician. In 1929, he enrolled at the Free University of Poland. He graduated in 1932 with a master’s degree in physics. He then continued at the University of Warsaw. In 1938, he obtained a doctorate in physics. In 1950, he earned his Ph.D. from the University of Liverpool.

In 1955, he signed the Russell-Einstein Manifesto, a document that called for the careful use of nuclear weapons. Two years later, he co-founded the Pugwash Conferences on Science and World Affairs, an organization to reduce global conflict. The organization helped establish the Partial Test Ban Treaty, the Chemical Weapons Convention, the Biological Weapons Convention, and the Nonproliferation Treaty. In 1960, he became the editor-in-chief of the Physics in Medicine and Biology journal.

He was one of the co-founders of the World Academy of Art and Science. He joined the board of the Stockholm International Peace Research Institute. He was also an advisor on medical research for the World Health Organization. In 1976, he retired from St Barts and briefly taught international relations at the University of Edinburgh.

In 1930, Jozef Rotblat married a woman named Tola Gryn. When he first went to England, she had to stay behind in Poland to recover from surgery. The war started soon, and she could not leave the country. He tried to help her escape, but he failed. She was soon captured by the Nazis, and she died at the Belzec concentration camp. He never remarried.

Jozef Rotblat died of sepsis at the Royal Free Hospital in London, on August 31, 2005. He was 96 years old. He was buried at the Hampstead Cemetery in Camden.