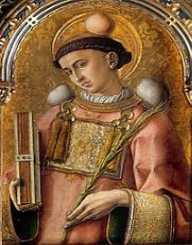 The first martyr of the Christian school of beliefs, St. Stephen was originally a Hellenistic Jew. He spoke in Greek language and was one of the first Christian converts in his community. As per the information available in the New Testament book of the Acts of the Apostles, the Apostles had conferred upon Stephen the holy orders and made him one of the seven members of the diaconate, more popularly known as the deacon. Stephen was the eldest amongst the deacons. Hence, the Apostles regarded him as the ‘archdeacon’.

Stephen's well-wishers described him as a man full of faith and holiness. His reputation of being a Holy Spirit led the Apostles to appoint him as one of the members who would serve the Church at Jerusalem. The members of the early Church distributed food and other charitable aids to the poor people in the community. However, the Greek widows did not find satisfaction in the service provided to them. They felt that the members of the Church gave preferential treatment to the Jewish widows and were neglecting their needs. Due to the growing dissatisfaction amongst the Greek widows, the Apostles decided to appoint deacons for ensuring better service to the widows.

Stephen was an evangelist. He preached the teachings of Christ to the Greek-speaking Jews. With his profound teachings, Stephen successfully managed to convert many of them into followers of Christ by engaging them in religious discussions. This enraged some of the members of the local synagogues. They could not bear the Gospel of Christ and hence, they repeatedly tried to prove Stephen wrong. But all their efforts went in vain. Unable to challenge the holy preachings of Stephen, they began lying to the people about him and tried to malign his image. Ultimately, they accused Stephen of trying to destroy their traditions and dragged him to the court of Sanhedrin. Sanhedrin was the highest legal court comprising of all elders of the Jewish community.


THE SAINT’S TRIAL AT SANHEDRIN

St Stephen did not lose his composure even after being summoned to the highest court of Sanhedrin. At the court, he delivered a long speech in his defense. The crux of his speech comprised of two crucial points. One established his severe criticism on the idea of the temple. People regarded a temple as the dwelling of God. Stephen, however, believed that the temple was an idolatry concept and that God did not dwell in a single place. The second important part of his speech talked about Israel’s past. It reiterated how Israel had earlier been hostile towards God’s grace. He even accused the religious authorities of not having faith in the Messiah. Stephen’s rebukes infuriated the members of the Sanhedrin council. They unleashed their fury on the offending mortal and dragged him away outside the city of Jerusalem.

STONING OF THE SAINT

Tradition says that Stephen’s stoning happened near the Damascus Gate. The Jews stoned Stephen to death while he vehemently prayed to Jesus to forgive his killers for their sins. They mercilessly left his body so that the dogs could eat it up. However, Apostle Paul and Apostle Barnabas’s teacher Gamaliel came on the second night and took Stephen’s body to his own place called Capharganda. The stoning of Stephen was the first Christian martyrdom. It is notable also because it was overseen by his own kinsman Saul who is believed to have consented to his death.

As per history, long after the people had forgotten about St. Stephen and his stoning, Father Lucian, the then priest at Capharganda received a message from Gamaliel. Gamaliel had informed him about the burial place of St. Stephen and had asked him to disentomb the graves of the saints. Fr. Lucian dug out the relics of St. Stephen and gave him an honorable burial. Some of his relics acted as healers for the sick. Three of his relics were kept at a church located on top of a cave on the hill. The rest of the relics were converted to Zion and eventually were transcribed into Constantinople.