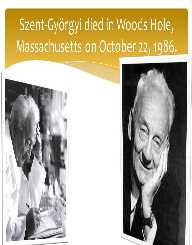 On 16th September 1893, a couple called Nicolaus von Szent-Gyorgyi and Josefine was blessed with a son in Budapest, Austria-Hungary. Albert von Szent-Györgyi was none other than Szent-Gyorgyi whose mother came from Lenhossek family. Not to mention his father owned a sizable land in Hungary.

Without a doubt, Albert’s invention started even before he was born. You find that his maternal grandpa, Joseph Lenhossek acted as the Professor of Anatomy. This is what made him to venture into the world of science since inception. Let’s just say that it was his calling and nothing else. Aside from the innermost talent that he gained from his ancestors, Albert von Szent-Györgyi also learnt how to play piano.

In 1938 Albert’s research gave birth to complex discoveries including the protein actin and the study of muscle movement. In short, his findings proved that the combination of energy and proteins helps in muscle contraction. It was the only work that led to the establishment of muscle research institutes.

At the end of WWII, Albert von Szent-Györgyi was appointed as the Member of Parliament. It was during his tenure that he re-introduced the Academy of Science. This paved the way for more laboratories and biochemistry departments.

From 1967 henceforth, Albert von Szent-Györgyi continued with his political ideals. His later works included the through investigations of free radicals as well as the leading cause of cancer.

After receiving the Nobel Prize in Medicine, Albert von Szent-Györgyi was honored with Cameron Prize in 1946 followed by Lasker Award in 1954. In between his careers; he teamed up with countable of societies. Some of them include the Academy of Science, Harvard University and the University of Liege. When it comes to his personal life, Sir Albert von Szent-Györgyi married more than two times. To be precise, he married for times. He first tied a nuptial knot with Cornelia Demeny with whom he had a daughter.