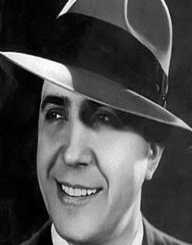 Carlos Gardel was born 11th December 1890, to Berthe Gardes. He was born in Toulouse, France. The father, although listed as “unknown” on the birth certificate, is believed to have been Paul Laserre. Laserre was a married man who had moved away from Toulouse several months before Gardes was born.

In 1893,  Carlos Gardel boarded a ship in Bordeaux, France, with his mother. They were bound for Buenos Aires, Argentina. They arrived on 11th March 1893. Gardel’s mother told authorities she was a widow, which avoided any stigma of having a child with no husband.

The pair found a place in San Nicolas, Buenos Aires, where they settled. Carlos Gardel’s mother found employment pressing clothes. She was able to press in the French style, which commanded more money, but they still lived a life of poverty.

Carlos Gardel spoke Spanish as he grew up, not French. Friends and family called him Carlos, which was the Spanish equivalent of Charles. He attended Pio IX Industrial High School, but dropped out before graduation, hoping to make a career as a singer.

Laserre travelled to Buenos Aires at one stage to see if  Carlos Gardel’s mother wanted to marry him. She had changed her name to Dona Berta, and her story of being a widow would be disrupted if she accepted the offer. Carlos Gardel and his mother decided that she would not take up Laserre’s offer.

Carlos Gardel’s singing career started on a small scale, as most do. He performed in bars and at private parties. He also sang with Francisco Martino at times, and they formed a trio with Jose Razzano. In 1917 he recorded Mi noche triste, a tango- cancion. He sold over 10,000 copies throughout Latin America and became an instant hit.

Carlos Gardel toured through South America including countries like Brazil, Argentina, Chile, Uruguay, Puerto Rico, Venezuela, and Columbia. He also performed in cities such as Paris, New York, Madrid, and Barcelona. In a 1928 visit to Paris, he sold over 70,000 records in his first three months. His popularity continued to grow, and it wasn’t long before Gardel started making movies for Paramount, in both the United States and France.

In 1935, Carlos Gardel died when the airplane he was travelling in crashed. He had made hundreds of three-minute tango recordings and was at the height of his career when he died. South America went into mourning for him.

Carlos Gardel’s first recording, Mi noche triste, is, without doubt, considered to be his major work. It was the first time the tango was danced to lyrics rather than just music.

Carlos Gardel never married. He understood that part of his appeal was due to women thinking he was single, and he played the card, keeping his love-life out of the news.

In 1920, he met Isabel del Valle. The couple remained close for over ten years, with Carlos Gardel providing del Valle with a house, and regular money to live on. Only his mother and most intimate friends knew about the relationship. When the relationship eventually began to wane, Carlos Gardel stopped the payments he had been making. Del Valle eventually married someone else and moved to Uruguay.

Carlos Gardel’s legacy is his contribution to tango music. He revolutionized tango dancing music by adding lyrics to it. Even today, people love his music.