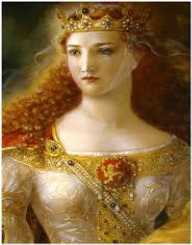 Eleanor of Aquitaine was born c. 1122, in Poitiers, France. She was born into the House of Ramnulfids. Her father was William X, Duke of Aquitaine, and her mother was Aenor de Chatellerault.

Her mother and brother died when she was around seven years old. As a result, Eleanor became heir to the throne.

Eleanor of Aquitaine received a broad education. She learned subjects such as mathematics, history, and star constellations. As well as academic subjects, she learned household management, sewing, spinning, and weaving. Other topics included literature, Latin, and music.

She learned the art of conversation, how to dance, and games of the time which included checkers, chess, and backgammon.

In early 1137, William X traveled to Bordeaux. He took Eleanor of Aquitaine and her younger sister with him, leaving them in the care of the Archbishop of Bordeaux. William continued to the Shrine of Saint James of Compostela with other pilgrims, but he died on 9th April.

Eleanor became the Duchess of Aquitaine in her early teens. Kidnapping heiresses were commonplace during the period, so William dictated his will on the day he died. William appointed King Louis VI of France to be her guardian. Also, he left all his landholdings to Eleanor.

King Louis's responsibility was to find Eleanor of Aquitaine husband. He immediately arranged for his son and heir, Prince Louis, to marry Eleanor. Louis did this for his benefit, as Eleanor's landholdings would now come under French rule. The new landholdings would significantly increase the power and prominence of France.

Eleanor of Aquitaine married Louis on 25th July 1137. The landholdings, however, remained separate to France. It wasn't until Eleanor's eldest son became King of France and Duke of Aquitaine that the lands would merge.

King Louis died on 1st August 1137, which made Louis and Eleanor the King and Queen of France.

Louis and Eleanor of Aquitaine went on the Second Crusade, which proved unsuccessful for them. As well as the Crusade, Eleanor was also very close to her uncle, Raymond. Her relationship with Raymond caused much discord between the royal couple.

As they returned to France, they traveled on separate ships. They both came upon stormy weather and had to readjust their courses. Eleanor reached Sicily five months later. She discovered that both she and her husband were believed to be dead.

She tried unsuccessfully on more than one occasion to have her marriage annulled. Eleanor of Aquitaine gave birth to two children, both girls, and Louis finally agreed to an annulment. They dissolved the marriage on 11th March 1152.

Eleanor of Aquitaine returned to Poitiers, and two different counts attempted to kidnap her so they could marry her. When she arrived, she immediately sent an envoy to Henry, Duke of Normandy, asking him to marry.

Henry ascended the throne of England on 25th October 1154. In December that same year, Eleanor became Queen of England. She had eight children with Henry over the next 13 years.

In 1167, Eleanor of Aquitaine moved her possessions to Argentan, where one of her daughters lived. Eleanor and Henry mutually agreed to live apart after this.

In early 1173, Eleanor of Aquitaine's son Henry launched a revolt on his father. He asked his brothers for help, as well as his mother.

The King of Rouen arrested Eleanor when she tried to leave Poitiers in 1173. Eleanor disappeared for a year, held under arrest by the King.

In July 1174 she sailed for England with the young Henry. When Eleanor disembarked in England, the authorities immediately took her as a prisoner.

Eleanor of Aquitaine became more distant from her sons as her time of imprisonment passed. When Henry II died on 6th July 1189, his son, Richard I became King. Richard immediately sent a representative to England and freed Eleanor.

Eleanor ruled England on behalf of Richard. He was away for four years taking part in the Third Crusade, and Eleanor survived her son Richard. Her younger son, John, became the next King.