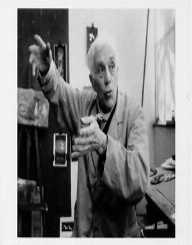 Georges Braque was a French painter, sculptor, and printmaker, who developed cubism together with Pablo Picasso.

Georges Braque was born in Argenteuil, a community in the suburbs of Paris, on May 13, 1882. He spent his childhood in the city of Le Havre. His father and grandfather were house painters.

He was trained to continue that job himself. From the age of 15 to 17, he attended evening classes for artistic painting at an art school. After that, he became an apprentice to an interior decorator in Paris. He also spent a year serving in the French military. From 1902 to 1904, he studied painting at Academie Hubert, a private academy in Paris.

Braque’s early paintings were Impressionist, influenced by artists such as Claude Monet and Camille Pissarro. He then visited an exhibition by a group called Les Fauves, meaning Wild Beasts. He was impressed by the work of the artists, which included Henri Matisse, Andre Derain, and others. He developed a Fauvist style himself.

Georges Braque worked for a while in Antwerp, Belgium, as well as in a few villages in the French Riviera. In 1907, he managed to sell six paintings at an exhibition in Salon des Interpendants. He soon signed with an art dealer, called Daniel-Henry Kahnweiler.

Braque socialized with many people in the artistic circles. In 1907, he met Pablo Picasso. The two of them soon started developing a new artistic movement, called Cubism. They were influenced by the work of the artist Paul Cezanne.

They depicted their subjects in an abstract way, with geometric forms. They constantly worked together in Paris and in villages in the south of France. Their paintings were almost exactly the same, their styles did not differ. Cubism went on to become one of the most influential modern art movements. It quickly spread all over Europe.

Georges Braque served in World War I. He was an infantry sergeant for the French Army. He got two decorations for his bravery. He was then badly injured in the head. He had to spend months in the hospital and a long recovery at home.

He was even blind for a while. During his recovery, he wrote many aphorisms. His friend, the poet Pierre Reverdy, published them in a magazine under the name “Thoughts and Reflections on Painting”.

Braque started painting again by the end of 1916. He continued with Cubism, although he used slightly less geometric forms than he did before. He no longer worked with Picasso. Instead, he was influenced by the artist Juan Gris.

By the 1920s, Braque became a well-known and wealthy artist. He moved his art studio from Montmartre to Montparnasse. In 1923 and in 1925, the Russian ballet organizer Serge Diaghilev hired him to design a few stage sets.

Braque also created many illustrations and prints that were produced at Mourlot Studios. He continued to make paintings. His style was usually a free interpretation of Cubism. He often drew women, birds, fruit, and different everyday objects. He won the Carnegie Prize for “The Yellow Tablecloth” in 1937. During World War II, he created small sculptures that were inspired by Ancient Greece.

He worked on a series of drawings called The Order of Birds, which were joined with texts written by the poet Saint-John Perse. During Braque’s final years, many museums and galleries held exhibits in his honor.

In 2010, The Museum of Modern Art of the City of Paris was robbed. The thief stole five paintings, which were estimated at about a hundred million euros. One of them was Braque’s Olive Tree near Estaque.

Georges Braque passed away on August 31, 1963. He was buried in the Church of St. Valery in Normandy.