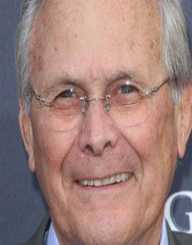 Former American Secretary of Defense Donald Rumsfeld was born on the 9 July 1932 to George Donald Rumsfield and Jeannette Huster in Chicago, Illinois. His father was a real estate salesman.

Donald Rumsfeld obtained a BA in Political Science from Princeton University (1954). During his time at Princeton, he was captain of the wrestling and football teams.

Between 1954-1957, Donald Rumsfeld served in the US Military as a Navy pilot and flight instructor. He joined the US Navy Reserves (1957-1989) and retired with the rank of captain.

Between 1957 and 1959, Donald Rumsfeld worked as administrative assistant to Ohio Congressman, David Dennison. In 1959, he became a member of Michigan Congressman Robert Griffin’s staff. Rumsfeld worked at A.G. Becker in Chicago, an investment banking company (1960-1962).

In 1962, Donald Rumsfeld was elected to the US House of Representatives, from Illinois’ 13th District. He opposed President Lyndon B. Johnson’s Great Society programmes but supported the Vietnam War as well as the 1964 Civil Rights Act. He was re-elected in 1964, 1966 and 1968. President Richard Nixon appointed Rumsfeld Director of the Office of Economic Opportunity in 1969. And from 1971 until 1972, he served as Counselor to the President as well as Director of the Economic Stabilization Program.

He was then appointed the US Ambassador to NATO (1973-1974) and was Chief of Staff for President Gerald Ford in 1974-1975. Rumsfeld then served as Secretary of Defense under President Ford between 1975-1977 before leaving politics for some time. During 1996, he served as an economic adviser and national chairman of Bob Dole’s presidential campaign.

In 1998, Donald Rumsfeld was appointed the Chair of the Commission to Assess the Ballistic Missle Threat to the United States. In January 2001, Rumsfeld became the Secretary of Defense. He testified before the 9-11 Commission in 2004 and in May that year made a trip to Iraq where he visited Abu Ghraib prison. President Bush announced in November 2006 that Rumsfeld was stepping down as Secretary of Defense.

In 1977 Donald Rumsfeld left politics and took up a position as the President and CEO of the pharmaceutical company of G.D. Searle & Co., and he remained until 1985. During this time, he was asked to visit the Middle East as a special representative of President Ronald Reagan (1983). He was made a senior adviser at William Blair & Co., an investment bank, in 1985. He then joined the General Instrument Corp as CEO (1990-1993).  Rumsfeld was appointed the chairman of the board of Gilead Science in 1997.

In 2007, Donald Rumsfeld was appointed a distinguished visiting fellow at The Hoover Institution at Stanford University. Many protested the appointment and signed a petition against it. Rumsfeld published a book entitled  Known and Unknown: A Memoir (2011). A documentary on Rumsfeld was released in 2013 entitled The Unknown Factor.

A 2009 Senate Armed Forces Committee report concluded that Rumsfeld had authorised harsh interrogation to be used at Guantanamo Bay which led to the abuse of prisoners.

In 1977, Donald Rumsfeld was awarded the Presidential Medal of Freedom, and in 1985, Princeton University presented him with the Woodrow Wilson Award.

Donald Rumsfeld married Joyce Pierson in 1954, and they had three children: Valerie, Marcy, and Nick.