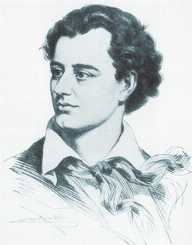 George Gordon Byron is more commonly known with the name Lord Byron. He is regarded as one of the greatest poets in the whole of England and some others in Greece view him as a Hero. Born on January 22, 1788, to a captain John Byron also known as, “Mad Jack” and Catherine Gordon who was the descendant of Cardinal Beaton, Byron had influence and was one of the leading figures of the Romantic Movement in the early 19th century.

Lord Byron was known for is excellent delivery and use of English. His works include “Childe Harold’s Pilgrimage, The Giaour,  andThe Bride of Abydos.”

Born in1788 to John Byron and the 6thchild, Byron had less fatherly presence growing up. His mother had schizophrenia. Byron practically lived his life without discipline and any sense of moderation for this reason. He received his early formal education at “Aberdeen Grammar School.”

In 1798 at the age of 10, Byron inherited the title Lord Byron from his uncle.

After Lord Byron was withdrawn from school in 1800 for his lack of discipline and violence, his mother sent him to Harrow in 1801. There he became a good cricketer and represented his school in 1805 at the first “Eton v Harrow” match at Lords. There in Harrow, Byron experienced his first sexual encounters of many and fell in love with his distant cousin Mary Chaworth. This love was however not returned, and it became his motivation for many of his poems.

In 1805 Byron entered Trinity College, Cambridge where he had several experiences, from gambling to boxing, horse riding, sexual escapades and falling into debt.

At the age of 17, Lord Byron became friends with Elizabeth Pigot and her brother John, and together they staged two plays to entertain the community. It was in Southwell with Elizabeth that Byron was encouraged to write his first volume of poetry“Fugitive Piece” which was printed by Ridge of Newark.

In 1808, Lord Byron instructed his relation R.C Dallas to publish his poem “Hours of Idleness” without his name due to the criticism it received. He went on to publish his “English Bards and Scotch Reviewers” in retaliation to the criticism of the former poem. This gained him his first recognition.
At the age of 21, Byron found himself in the House of Lords. He decides to go on a tour to different countries, Spain, Malta, Greece, and Turkey. During this period he gained inspiration to write another poem “Childe Harold’s Pilgrimage.”

After the death of his mother in 1811, Lord Byron returned to London and published his poem the “Childe Harold’s Pilgrimage.”

Lost in deep depression, mourning his mother Lord Byron got into several love affairs with the classic and passionate Lady Caroline Lamb, who described him as “Mad, Bad, and Dangerous to know” and then he got involved with Lady Oxford. His wife might have regarded him as insane, but the other ladies saw him as their hero.

In 1823, while in Genoa, Lord Byron aided Greece to gain independence from the Ottoman Empire.

Byron was recognized for his works, and he gained so much popularity that at the age of 21 he won the majority of the vote to be in the House of Lords.

The National poet of Greece Dionysios Solomon wrote a poem about the unexpected loss of Lord Byron titled “To the Death of Lord Byron.”

A town near Athens called Vyronas is named in his honor.

Greece did not forget Lord Byron in such a short time after he played a huge role in their independence from Ottoman’s Empire.

Lord Byron was regarded as notorious and undisciplined.  In 1813, Byron began an affair with his half-sister, Augusta who was already married to her cousin, Colonel George Leigh, and their union brought three children.

Lord Byron had a tough life. According to his lawyer, a nurse sexually abused him at the age of 9, and his mother’s suitor Lord GreyDeRuthyn made some sexual advances towards him.

Lord Byron married the cousin of one of his mistress’s Anna Isabella Milbanke on January 2, 1815. She was well disciplined and gifted in mathematics, but their marriage proved to be unhappy, and they parted ways in 1816. They had a daughter together called Ada whom Anne took along with her.

Lord Byron fell ill in February 1824 and recovered for a while. In April he was diagnosed to have sepsis. He developed a violent fever and died on the 19thof April the same year.

Despite his immoral behaviors, Lord Byron is primarily remembered with admiration as a poet of genius.