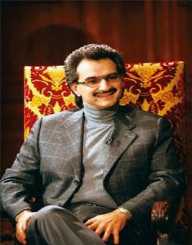 Saudi Arabian investor HRH Prince Alwaleed bin Talal was born into the Saudi royal family. He was born in March 1955 and is the son of Talal bin Abdulaziz Al Saud. He is also the half-nephew of Saudi King Salman and the grandson of Ibn Saud, the founder and first monarch of Saudi Arabia. His mother was Mona Al Solh, the daughter of Riad Al Solh, Lebanon’s first prime minister.

Prince Alwaleed bin Talal did his tertiary education in the United States. He was awarded a BA in business administration from Menlo College in California and an MA in Social Sciences from Syracuse University in New York.

Prince Alwaleed bin Talal Alwaleed is a self-made billionaire with his father providing initial assistance with a $300,000 loan, a house, and a $30,000 endowment. He began investing in construction, and in 1991 he spent in Citigroup which was going through a difficult period. He went on to successfully rescue other companies, and his wealth grew.

Prince Alwaleed bin Talal founded his own company Kingdom Establishment for Commerce and Trade in 1979. Profits from first successful deals were invested into the Riyadh property market and formed the basis of KHC’s future success.

In 1988 Prince Alwaleed’s company bought a controlling stake in the United Saudi Commercial Bank which was struggling problems at the time. Within the space of twelve months, the bank was one of the most successful commercial banks in Saudi Arabia. A merger between the Saudi Cairo Bank, Saudi American Bank and the United Saudi Commercial Bank in 1999 formed one of the most prominent banking groups in the region. In 1991 Prince Alwaleed invested into the ailing Citibank and turned the bank’s fortunes around.

Prince Alwaleed holds stakes in many iconic companies including Citigroup, Twitter, Apple, Time Warner, Four Seasons Hotel & Resorts, the Hotel George V in Paris and the Savoy Hotel in London, real estate, health, fashion and many other assets. He is also involved with Breakthrough Energy Coalition and owns the Rotana group which is the Arab world’s most important entertainment company.

Forbes had wealth estimated his wealth to be in the region of $17-18 billion. He instigated a libel action against Forbes in 2013 for under-estimating his wealth.

The Guardian reported in 2015 that the prince had announced that he would be donating his wealth to charity. Part of this would be through his own Alwaleed Philanthropies organization, along with the lines of the Bill and Melinda Gates Foundation.

Prince Alwaleed bin Talal bought Donald Trump’s yacht in 1991. In June 2016 Talal tweeted Trump on Twitter to say that he would never win the presidential race and should drop out. He also was reported as saying that Trump was a disgrace to America but after Trump’s had gained office, he changed his mind and congratulated him on his win on Twitter.

Prince Alwaleed bin Talal has received many awards, medals, and honors including Baden-Powell Medal, Sweden (2013), the Middle Cross of the Hungarian Order of Merit (2014), Grand Officer of the Order of Leopold, Belgium (2014)