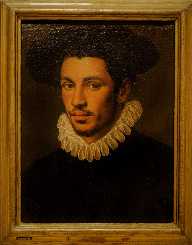 Annibale Carracci was born 3rd November 1560 to Antonio Carracci and his wife. He was born in Bologna, Italy, and had an older brother, Agostino. His father was a tailor. Annibale Carracci’s artistic education came from his cousin, Lodovico Carracci. Lodovico was, himself, a painter, and when it became evident that both Carracci and his brother had artistic talent, they were taken under his wing and trained.

Coupled with this, Annibale Carracci went on a tour of Northern Italy in his late teens, to study work that had been created by some of the masters. Viewing their work first-hand had a deep and lasting effect on Carracci.

It was difficult to tell, in earlier works, who painted what, so similar was their style, but Annibale Carracci completed many works on his own. He painted several altarpieces and frescoes for different churches, and many other works as well.

Annibale Carracci was commissioned to decorate the Palazzo Farnese in Rome, upon recommendation by the Duke of Parma. In late 1595, Annibale Carracci traveled with his brother to Rome, to begin the work. He led a team who painted frescoes on the ceiling of the grand salon. Through the 17th and 18th centuries, the Farnese Ceiling was considered a masterpiece in fresco painting, without rival for its artistry. The work took from 1597 to 1605 to complete.

Annibale Carracci went on in later years to complete several important works, which are on show in different galleries around the world.

Annibale Carracci was considered one of the most influential painters in the Italian Baroque style of the 16th and 17th centuries. His paintings, today, can be found in various museums around the world.