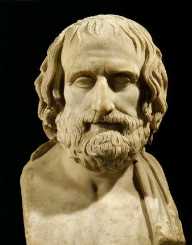 Euripides was born c. 480 BC, to Mnesarchus, his father, and Cleito, his mother. He was born in Salamis, Greece. His father was a local shop owner, who received a message from an oracle.

Due to the message saying Euripides was going to win "crowns of victory," his father encouraged him to training athletics.

Destined for the stage rather than the track field, Euripides started writing. He also studied philosophy under the famous masters, Anaxagoras, and Prodicus.

There were three great tragedian playwrights, of which Euripides was one. The others were Aeschylus and Sophocles.

The comic playwrights ridiculed the tragedians, but their humor showed some respect for Euripides.

Although about 80% of his plays have disappeared, 20% have survived.

The government encouraged performances of Athenian tragedy. As a result, the state funded the playwrights and gave prizes.

Although Sophocles and Aeschylus were modern in their approach, Euripides was even more talented. As a result, he could quickly move between the genres when he was writing his plays. The styles included tragic, romantic, comic, and political.

Euripides wrote in the 5th century BC when there was a lack of print presses. Due to this, many of his plays disappeared over time.

Several of his works were recovered and preserved.

A compilation of ten plays by Euripides circulated close to 200 AD. An unknown Byzantine scholar published the second book of Euripides' works compiled in alphabetical order. These are the 19 plays still preserved today. The Vatican stores the plays for safekeeping.

The 19 works available include Medea (431 BC) and The Trojan Women (415). There are a further 60 plays which are lost or only have fragments available.

Euripides entered a famous Athenian dramatic festival called the City Dionysia each year. He started competing in 455 BC, and he won first prize in 441 BC. He went on to win first prize five times.

Euripides married twice. His first wife was Melite, and his second wife, Choerine. Both women were unfaithful to him, which caused the marriages to end. He had three sons with Choerine.

By the time his second marriage ended, Euripides had become a recluse.