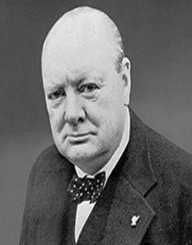 Winston Spencer Churchill was born in Blenheim Palace, Oxfordshire, the UK on November 30th, 1874 to Lord and Lady Randolph Churchill (his Mother’s name was Jennie Jerome). Winston had a fairly typical upbringing for his class in Victorian England. By age seven he was living at a boarding school. It was the first of three schools he would attend before going to Military college.

At the first school, St. Georges, Winston Churchill was not an exemplary student. He was consistently at the bottom of his class for conduct and many of his school subjects.  He stayed at this school, receiving regular ‘birchings’ (read: beatings) for not doing well enough in his subjects from the age of 7 until he was almost 11 when he was moved to the Misses Thompsons Brighton School. This school is more fondly remembered by Churchill, not just because of the lack of beatings but because they allowed him to study in fields that caught and held his interest.

Unsurprisingly, his ratings improved in his subjects, but not his conduct. He was still consistently low on the list of well-behaved students. In 1888, at the age of 15, he was moved to Harrow School, just outside of London. He wrote of the difficulty he had at Harrow but also that he learned much.

Most of the childhood of Winston Churchill was spent in the company of people who were not his family. His father was an active politician, and world traveler and his mother was a socialite with a full schedule that rarely involved seeing her eldest son. It is said that he adored his parents but from afar. Letters to his parents were filled with requests for them to visit him but they almost never did. There were even occasions when his father would be in the same town but not stop to visit his son. The regular visits he received every year were from his beloved Nanny Elizabeth Everest.  She would often bring Winston’s younger brother Jack with her for these visits.

It’s said the reason Lord and Lady Churchill decided to remove their son from St. Georges was because Mrs. Everest reported to them the severity of the beatings Winston was receiving. While Winston Churchill was still an adolescent, his father suggested that he pursue a military career because he feared his son would not be able to pass the entrance exams for University.

Winston pursued this militaristic goal unflaggingly, except for a very short period when he considered the clergy. After his time at Harrow School ended, Winston passed a preliminary exam for Sandhurst Royal Military College. On his third attempt to pass the full entrance exam for Sandhurst Winston was successful, his previous two attempts were not up to snuff for entry.

Winston Churchill graduated from Sandhurst in the spring of 1895, at age 20, with a commission into the Fourth Hussars Cavalry Regiment.  This caused a bit of contention with his father because his father demanded that he should be an infantryman, cavalry not being considered adequate at the time for an aristocrat. Winston repeatedly told his mother in correspondence that he preferred the cavalry for a variety of reasons, among them being his love of horses and his riding skill. He was also an avid polo player and led his regimental team in games against other regimental teams.

Winston Churchill started his career in the Military, under the Queens Fourth Hussars Cavalry Regiment, as previously stated. He was sent to India with his regiment and also worked as a newspaper correspondent while he was there. During the years 1895 through 1899, he fought in and reported on three separate wars and wrote four books. He was in India, Egypt, and Cuba. In 1899 He left the army to run for a seat in the House of Commons, his bid was unsuccessful, and he returned to the military.

Upon his return to the army, Winston Churchill went to South Africa to report on the Anglo-Boer War. He went only to report this time. He was captured when the Boer’s ambushed an armored train he was on. He tried to convince his captors he was just a journalist but he had volunteered as a fighter during the ambush, and the reports of his bravery were widely reported by survivors of the attack. The Boers took him and two others captive. When his attempt to convince the Boers to release him failed, he resolved to escape.

After a month in captivity, he escaped through a small bathroom window and made his way to freedom. He wrote an account of this in his book London to Ladysmith by way of Pretoria. The capture and subsequent escape catapulted Churchill to fame worldwide. He was asked to be a lieutenant in the South African Light Horse even though holding a lieutenant rank and being a war correspondent were against regulations. The general who asked him to become a lieutenant said that he decided to break the rule because Churchill has impressed him with his work ethic and moral character.

Winston Churchill's sudden fame helped him to achieve a seat in the House of Commons in 1900 as part of the Conservative Party for Oldham.

Most accounts of Winston Churchill focus on his long and active political career. Over the course of his life, he also published more than thirty books. Some of them ran into volumes. He was a prolific writer. Churchill spent most of the rest of his life involved in politics. The start of this was the Conservative party seat in the House of Commons (HOC) for Oldham. During his early years in the HOC Churchill had a conflict with his party on many issues, most notably their protective tariff policy and his support of free trade.

In 1904 he created a stir by leaving his seat on the conservative side of the house and walking over to take a seat as a liberal. In 1906 the liberal party made huge gains and the new Prime Minister, Henry Campbell, made Churchill the Undersecretary of State for the Colonies. From 1908, when he became a full cabinet member as the President of the Board of Trade until 1911 when he was appointed First Lord of the Admiralty, Churchill held a number of position in the government.

During this time (1907-1908), Winston Churchill met, briefly courted, and married Clementine Hozier. She was considered a great beauty, and they would remain happily married for fifty seven years. She was the love of his life, and they would have five children together, one of whom would die in childhood.

As First Lord of the Admiralty, Churchill strongly advocated for the building of new battleships, the strengthening of the Grand Fleet, an increase in naval gun size, and acceptance of the tank. He was one of the first military leaders in the world to see and understand the might of the tank, and Great Britain first used them in battle in 1916. He was an unorthodox military strategist, and this worked for and against him.

Winston Churchill was disgraced and resigned from the Admiralty in 1915 after a failed push to open a sea route to Russia through the Dardanelle’s. After his resignation, he stayed in government briefly but soon chose to rejoin the army. He went to France as a Battalion Commander with the Sixth Royal Scots Fusiliers. This only lasted until 1916, and by 1917 he was back in the government as the Minister of Munitions in a coalition cabinet.

During the 1920’s and 30’s, he was in and out of government in a variety of positions. He spent a lot of this time writing and traveling abroad as a lecturer. Politics in the UK at this time were tumultuous. Churchill changed parties again, from Liberal back to his original Conservative. He was made Chancellor of the Exchequer under Conservative Party PM Stanley Baldwin. This put him in charge of the nation's finances and he briefly returned the UK to the gold standard. This proved to be a disaster and led to trade union and then general strikes. The Labor party rode to victory and Churchill was out of the cabinet again, but remained in the House of Commons.

From 1929 to 1939 Winston Churchill was ignored mainly by Conservative leadership and was untrusted by both parties. Being considered rather mercurial. As early as 1933 Churchill started to express his concerns about Hitler’s rise to power and what he saw a peril to the UK because of it.  He was one of the few UK leaders who were against Hitler from the start and Churchill loudly and vigorously denounced PM Neville Chamberlain’s policy of appeasement toward the Nazi party.

In 1939, a few hours after war was declared against Germany, Churchill was again brought into the Cabinet as Lord of the Admiralty. For eight months Churchill’s popularity grew as he directed the forces of the UK against the Nazi’s. On May 10, 1940, the Nazi’s invaded the Low Country, and that spelled the end for Neville Chamberlain.

Winston Spencer Churchill was sworn in as Prime Minister of Great Britain on May 10, 1940. After the forced resignation of his predecessor.  Churchill formed a coalition cabinet, and within two days of his taking office, he had to deal with the fall of France to the Nazi’s. His gift for oratory was one of his greatest morale building tools for the people of Britain. In 1941 the United States and the Soviet Union became allies of Great Britain in the second World War.

A short two months after the surrender of the Axis forces to the Allies, Churchill was replaced as PM by Clement Attlee of the Labour party. He is said to have been devastated by this after bringing the country through the War.

After WWII, Churchill stayed in the HOC. He became Prime Minister again from 1951 through 1955, when he retired from the position for health reasons. During this time he also took his pen back up and wrote more books. Including a six-volume treatise on the Great War that earned him the Nobel Prize for Literature in 1953. In the same year, he was knighted by Queen Elizabeth II. After his resignation as Prime Minister in 1955, he refused a Dukedom and stayed in the HOC. He remained in the HOC until 1964 when he retired permanently from politics.

Winston Churchill's failing health is considered to be the only reason he voluntarily left politics. Churchill spent less than a full year as a retired politician. On January 24th, 1965 Winston Churchill passed away in his home in Hyde Park, London. This was exactly 70 years, to the day, of his father’s untimely death. Churchill had the most extensive state funeral that had ever been seen at that time. Representatives from 113 countries came to pay respects to him before he was interred in the family plot in Bladon, near Blenheim Palace.