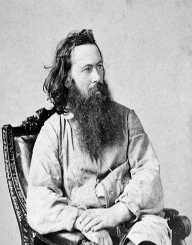 Alexander Gardner was an immigrant Scottish photographer who captured the battles in the American Civil War.

Alexander Gardner was born on October 17, 1821, in the town of Paisley in Scotland. He was the son of James Gardner and his wife Jean. He grew up in Glasgow after his family relocated in a strict Church of Scotland environment. He started working in a jewelry shop when he turned 14. He worked at the shop until his adulthood. In 1850, Gardner and his brother James traveled to the US. They wanted to start a cooperative community like the ones in Britain. Gardner purchased a piece of land in Iowa but never settled. He returned back to Britain to solicit more funds for the venture.

In 1851, he took over the ownership of the local daily Glasgow Sentinel. He operated the newspaper until 1856, transforming it into the second most read daily in Scotland. He immigrated to the US with his family. He discovered that most of his cooperative friends had died of tropical tuberculosis in Iowa. Gardner settled in New York.

He started working for the American photographer Mathew Brady in 1856. In 1858, Brady made him the head of operations at his gallery in Washington DC.

In 1861, the American Civil War broke out. Soldiers going for war took photographs as memories of the fighting, or treasures for their families in case they died in battle. Gardner became a frontline photographer on the battlefield with his bios Brady. Brady had a change of heart after witnessing the two armies fight in Virginia. He resolved to document the war on photographs. He deployed his photographers across the US to cover as much action as possible. He gave each of the photographers a portable darkroom for instant processing of the films.

Gardner traveled with General McClellan in the battlefield. In November 1861, Gardner bestowed an honorary rank of Captain of the staff working under McClellan’s command. As honorary captain, Gardner moved freely with the fighting Union soldiers on the frontline. On September 17, 1862, the Battle of Antietam began in earnest. It proved to be the deadliest battle in the civil war. Both armies suffered their highest number of fatalities. Two days into the battle, Gardner documented the harsh realities of the fighting. He became the first photographer to capture the dead on camera still lying on the frontline.

The Union army won the battle with heavy casualties on both sides. Gardner continued with the coverage of battles in the war. Compared to his colleagues, Gardner covered the deadliest of all the battles going by the casualties recorded. From Antietam, he covered the battles of Fredericksburg and Gettysburg. He risked his life to cover the siege of Petersburg. He photographed President Lincoln as he visited General McClellan on the battlefield in Antietam. Gardner took the last official photograph of the assassinated president before his death. He photographed the execution of the convicted killers of the president. Apparently, he was the only photographer who witnessed the hanging.

Brady organized a photo gallery showcasing the harsh realities of the war as it progressed. He was praised for bringing out the harsh realities of the war. Ironically, Gardner who braved death on the battlefield was never appreciated in the gallery. In 1863, Gardner broke away from Brady and worked alone. In 1866, Gardner released a collection of 100 photographic prints captured during the war. The two former partners engaged in hostilities in the US Congress. They produced two sets of photo galleries to Congress. The US Congress bought all the photographs.

In 1867, Gardner was commissioned as the official photographer of the transport project, Union Pacific Railroad. He traveled with workers throughout the construction of the railway line. He took photographs in the construction of Kansas section. Gardner documented the progress of the construction in the hostile regions of the Native American territories. He also documented his encounters with some Native tribes. Gardner left his photography career in 1871. He founded and operated an insurance company until his death.

Photograph analysts argued that Gardner manipulated some scenes to produce the best photos he wanted. The analysts said the famous Home of The Sharpshooter photograph was produced in two positions. The photographs showed the dead soldier in two different static poses. The controversy still rages on over a century after the photographing.

Gardner died on December 10, 1882, in Washington DC at the age of 61. He was survived by his widow Margaret Gardner and two children. He was buried in the Glenwood Cemetery in the District of Columbia.

Alexander Gardner was a prolific photographer. He braved the battlefields to capture the most memorable photographs during the war. He gave the public a glimpse of the fighting in the fields. Many families appreciated his work and professionalism. He always said the photographs spoke for themselves.

The 1970s controversial allegations of manipulating the dead soldiers for a captivating shot cast a shadow on his credibility. Whether that was true or not, is a debate that still rages on.