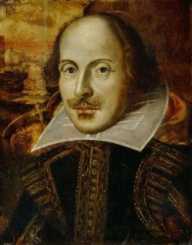 William Shakespeare spent his life on plays, poetry, and theater. Even more than 500 years after his birth, his name is synonymous with classic English literature.

William Shakespeare was born on April 23, 1564, in Stratford-Upon-Avon, England. His parents were John and Mary. John was a merchant but also held the public offices of alderman and bailiff.

The young Shakespeare had seven brothers and sisters. Church records established that his baptism was on April 26, 1564.

William Shakespeare may have attended King's New School in his hometown of Stratford-Upon-Avon. With a father who held a public office, he was likely to have completed an education in Latin and classic literature.

Little is known about Shakespeare's whereabouts during his youth and early twenties. By the time William Shakespeare was about 26, he was working in the theaters of London. Performance records have his first plays on stage in London around 1592.

The time that records indicate that William Shakespeare had written and produced plays in Elizabethan London, his popularity was already on the rise. These performances were put on by the Lord Chamberlain's Men.

This acting group, along with Shakespeare, performed throughout London before they bought the Globe Theater in 1599. The permanent residence at the Globe as well as the success of their productions made William Shakespeare more secure financially.

The works of William Shakespeare did not get published until after 1603. By then, King James I succeeded Queen Elizabeth and changed the acting company's name to King's Men. To continue on the popularity of the group, they sold the printed work as popular literature.

His early works such as “Richard II” came from historical inspiration. As he gained more confidence in his writing, he tried genres from comedy to drama to tragedy. With characters that dealt with emotions and conflicts, not all of these stories ended with a happy ending. In his later years, some of his tragic comedies had a change, in the end, leaving the audience with a more happy conclusion.

William Shakespeare did not rely on his writing and acting alone. He made investments in real estate that allowed him to make money. By doing so, he could focus more on the craft of writing rather than making money to provide for his family.

William Shakespeare is believed to have written poetry throughout his life. When the theaters were closed due to the plague in 1593 to 1594, he busied himself with two poems, “Venus and Adonis” and “The Rape of Lucrece.”

Both of these early works were dedicated to Henry Wriothesley, the Earl of Southampton. Shakespeare's last and most extensive printed work of poetry were sonnets.

The collection titled “Sonnets” contained 154 examples of the structured verse. Topics and subjects range from life and death or love and loss.

When William Shakespeare was 18, he married the 26-year old Anne Hathaway. Together they had three children. With the success of his printed work, Shakespeare was able to buy a mansion in Stratford-Upon-Avon.

In total, William Shakespeare wrote 38 plays and 154 sonnets. His work in tragedies and comedies is required reading for instruction in high schools and college courses around the world.

Not only did he leave a legacy of literature, but also expressions in the English language. Some phrases that are linked back to Shakespeare include “in a pickle” and “foul play.”

William Shakespeare also influenced 20th century authors like James Joyce and Mark Twain. Plays such as “Romeo and Juliet” have been the basis of contemporary movies. The 1961 Oscar-winning film West Side Story is just one adaptation. His plays and poems are examples of the different human emotions and conflicts in literature.

Due to the period of William Shakespeare, there is little concrete information and many questions about his birth, education, and even death.  Some of his critics argued that he may not have been the most celebrated writer that the world has known.

They were uncertain if he was indeed the actual author. However, William Shakespeare continues to have the legacy of the Greatest Writer and the Bard of Avon.

Hamlet, Macbeth, Romeo and Juliet, Othello, A Midsummer Night's Dream, Much Ado About Nothing, The Taming of the Shrew, Richard III
Merchant of Venice' Julius Caesar, King Lear, The Tempest

Venus and Adonis, The Rape of Lucrece, A Lover's Complaint, The Phoenix and the Turtle, Sonnets