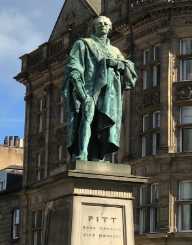 William Pitt was born on June 4, 1855, in Melbourne, Victoria, Australia. His parents were Jane and William Pitt Sr.

As a youth, William Pitt attended the Hofwyl School near his hometown. Later on, he studied at George Henry’s Neighbor's College.

In 1877, William Pitt worked on one of his first major architectural jobs: The Princess Theatre. The theatre had been closed, and it needed renovations. Two years later, he worked on another big project: the Melbourne Coffee Palace. This architecture was fantastic and drew attention to William Pitt right away. This helped to boost his career.

In the 1880’s, William Pitt would go on to begin his career in politics. He continued to work on his architecture projects at the same time, though. 1881, William Pitt would become a member of the Victorian Legislative Council. Also in this year, he began working on the Melbourne Board of Works. However, he only did this until 1882.

Pitt’s first gothic style building was made in 1883. He was contracted to work on the Gordon House Apartments. This style was new to him, but William Pitt excelled in the project. Later in that decade, in 1887, he was made the vice president of the Victorian Institute of Architects. Here, William Pitt was able to learn more about architecture, especially the gothic style that he was still new to. In 1888, he worked on the Federal Coffee Palace. This was the biggest building in Melbourne at the time of construction.

In 1890, William Pitt designed the Kilda Town Hall. This was not made in the gothic style, but instead in the neoclassical style.

In 1894, William Pitt retired from his spot on the city council. He stayed out of politics for a few years and began focusing on architecture again. During the later parts of the 1890’s, Pitt’s work was focused on renovations. William Pitt made additions and changes to many buildings during these years, including working on His Majesty’s Ballarat.

The first decade of the 1900’s was a highly productive time for Pitt, both in his political and architectural career. In 1901, William Pitt was made a chairman of the Melbourne Harbor Trust. Also in this decade, William Pitt designed some fantastic buildings including the following: Avalon Mansion, Her Majesty’s Theatre, Bryant and May Factory, and the New Opera House (now called the Tivoli).

The 1910’s were Pitt’s last years of life, and William Pitt worked until the end. During this time, William Pitt continued to work on both new designs for buildings, as well as on renovations. Some of the buildings he worked on during this decade were the Charles Hotham Hotel and the Victorian Racing Club (which has since been destroyed). It was also in 1910 that he stopped working as a member of the Victorian Legislative Council.

During his lifetime, William Pitt was a member of many prestigious groups. Below is a list of just some of the groups he was involved in at some point in his life.

William Pitt married Elizabeth Liddy in 1889. This couple had four children together. The marriage ended in 1919 with Pitt’s death.

William Pitt died on May 25, 1919, in Abbotsford, Victoria, Australia. He was only 62 years old when he passed away.