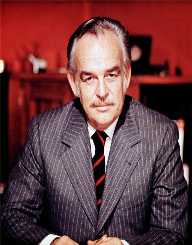 Prince Rainier III was born on the 31 May 1923. He has one sister, Princess Antoinette. He was the 30th descendant of Otto Canella, the founder of the house of Grimaldi, royals rulers of Monaco since 1297. His mother, Charlotte, was a princess who had been born out of wedlock. Prince Albert (his great-grandfather) had been married to Lady Mary Douglas Hamilton, but their marriage was ended in 1880. It was Prince Albert’s relationship with a French woman in Algeria that led to the birth of Princess Charlotte. Princess Charlotte married Prince Pierre de Polignac in 1920 but Rainier’s parents divorced shortly after his birth.

Prince Rainier III was educated in France, England, and Switzerland.

Prince Rainier III enlisted in the Army during World War II, and in 1949, when his grandfather died, he became ruler of Monaco.

Under his rule, Monaco became a tax haven for international millionaires. A casino was built that attracted big-spenders and luxury hotels and high rise buildings meant that Monaco’s real estate became sought after and some of the most expensive in the world.

Prince Rainier III negotiated with France to keep Monaco’s ban on personal income tax, and he also had issues with Aristotle Onassis over the control of the company that operated the gambling operations and five-star hotels in the principality.

In his younger years, Prince Rainier III had a relationship with Gisele Pascal, a French actress. He married Oscar award-winning American film star Grace Kelly in April 1956 in a wedding that was termed the wedding of the century. The couple had three children Caroline (b.1956), Albert (b.1957) and Stephanie (b.1965). His wife, Grace Kelly, was killed in a car crash in 1982.

Prince Rainier of Monaco died on the 6 April 2005 and was succeeded by his son Albert.