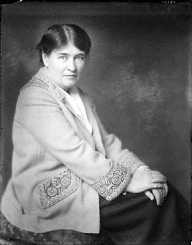 Willa Sibert Cather was born on December 7, 1873, in Back Creek Valley, Winchester, Virginia. When Cather was nine years old, the family moved to Nebraska. The fertile and flat farmlands appealed her father and the family wanted to escape tuberculosis outbreaks in Virginia. Her father tried out farming but later opened a real estate and insurance business. They lived in a small town of Red Cloud, and Willa began attending school for the first time in her life. Her early work was published in the town’s local newspaper.

Cather was the oldest of seven children to her parents. Cather made friends with a local couple, the Weiners, who gave her the access to their excessive library. She also made house calls with the local doctor, which prompted her wanting to become a doctor. Cather later attended the University of Nebraska.

Willa Sibert Cather began publishing her written works in the Nebraska State Journal and became a regular contributor. She also worked as the managing editor of her Universities student newspaper. After her success as a writer, Cather changed her major from science to English and graduated with a Bachelor of Arts in 1894.

After graduating from the University of Nebraska, Willa Sibert Cather moved to Pittsburg and began writing for the Home Monthly journal. In 1897, she became the editor and drama critic for the Pittsburgh Leader, where she also published her poetry works. She also worked as Latin, Algebra and English composition teacher at the Pittsburg Central High School. After a year, she began working at the Allegheny High School and soon became its head of English Department.

In her first year in Pittsburgh, Cather wrote several short stories, like “Tommy, the Unsentimental.” However, her first collection of short stories, The Troll Garden was published only in 1905. The following year, she moved to New York and began working in the editorial staff of McClure’s Magazine. At the same time, she was also working on the biography of Mary Baker Eddy, who founded the Christian Science. The autobiography “Mary Baker G. Eddy: The Story of Her Life and the History of Christian Science” was published in McClure’s in fourteen installments. The book of the same name was published in 1909.

Willa Sibert Cather published her first novel Alexander’s Bridge as a serial in McClure’s in 1912. Her first novel garnered a lot of attention and critical praise. Her next work was the famous Prairie Trilogy- O Pioneers!, The Song of the Lark and My Antonia. These three works, published in 1913, 1915 and 1918 became her most famous and critically acclaimed works.

During the next years, Cather established herself as one of the major American writers. Her novel One of Ours received the Pulitzer Prize in 1922. However, during the 1930s, her career experienced a slump, since critics claimed her work was too idealistic and lacked social relevance. Despite the critics' opinions, Carter’s 1931 book Shadows on the Rock became the most read novel in the United States and her novel Lucy Gayheart was the number one bestseller in 1935.

During her time at the University, Willa Sibert Cather often wore masculine clothing and used the nickname William. She had several friendships with other women, like her college friend Louise Pound, a socialite in Pittsburg Isabelle McClung and opera singer Olive Fremstad. Her most notable relationship was with the editor Edith Lewis, with who Cather lived together for 39 years until her death in 1947.

Cather was a very private person and destroyed most of her papers and letters. In 2013, The Selected Letters of Willa Carter was published, containing 566 letters from Cather to her friends, family, and literary acquaintances.

Willa Sibert Cather published her last short fiction work in 1932 named Obscure Destinies. During this time, she and Lewis moved into an apartment in Park Avenue, where she began working on her novel Lucy Gayheart. In 1938, Cather suffered a significant personal loss, when her brother Douglas died of a heart attack. Just a couple of months later, her friend Isabelle McClung also died. After this, Cather revealed her friends that Isabelle was the one she wrote all her books for.

In 1940, Cather finished her final novel Sapphira and the Slave Girl. In 1943, she was elected as a fellow at the American Academy of Arts and Sciences. The following year, she received the gold medal for fiction from the National Institute of Arts and Letters. However, by this time her health began to deteriorate. She died on April 24, 1947, from a cerebral hemorrhage.