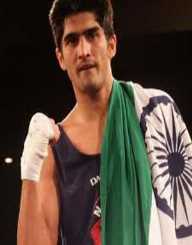 Vijender Singh is an Indian Professional Boxer, having started his professional career only on June 29, 2015. Since then he won six consecutive professional boxing matches by knockout. In the seventh such game, he fought for the vacant WBO Asia Pacific Super Middleweight Title against Australian Kerry Hope on July 7, 2016. This time he won by unanimous decision ending a six-match knockout winning streak.

Vijender Singh again successfully defended the title on November 15, 2016, in a match played against former world champion Francis Cheka by a method of technical knockout. Francis Cheka was the reigning World Boxing Federation Intercontinental super middleweight champion and the most experienced opponent Vijender Singh played since turning pro at the time of his title defense.

Vijender Singh Beniwal, popularly known as Vijender Singh is a Jat from the state of Haryana in India. He was born on 29 October 1985 in a village called Kaluwas in Bhiwani district of Haryana.

His father Mahipal Singh Beniwal is a bus driver with the Haryana Roadways and mother Krishna Devi is a homemaker. Vijender has a boxer elder brother called Manoj. Their father Mahipal worked hard and often drove buses in extra hours for earning overtime money. The extra money was required to meet the educational expenses of the two brothers. Vijender completed his primary education by attending a village school in Kaluwas. He then came to Bhiwani and enrolled himself in the Happy Senior Secondary School, Bhiwani. During his secondary school days he took a keen interest in boxing and following his elder brother Manoj’s footsteps, he started learning boxing seriously. Vijender graduated from the local Vaish College.

Vijender and his elder brother Manoj enrolled themselves at the famous local Bhiwani Boxing Club. In 1990, boxer Raj Kumar Sangwan received the Arjuna Award. Due to this, the craze for boxing in India and as an alternative career option increased many folds. Manoj had already established himself as a boxer and even succeeded in securing a job in Indian Army in 1998 with his boxing credentials. So, with financial support from his elder brother and moral support from his parents, Vijender continued his boxing training sincerely and started pursuing the sport not only as a passion but also as a career choice.

While practicing at the Bhiwani Boxing Club, Vijender Singh came in contact with former national level boxer Jagdish Singh. Jagdish Singh was able to spot and recognize his talent. In 1997, in his first sub-junior national tournament he won a silver medal. National recognition was not far behind. He bagged the gold medal in 2000 National Championship. In 2003, he became the All India Youth Boxing Champion.

The turning point of his career was his selection for the 2003 Afro-Asian Games. Though Vijender Singh was a junior boxer at that time, still he was picked up for the selection trial and was selected for the final meet. Vijender eventually went on to win the Gold Medal at the 2003 Afro-Asian Games held in Hyderabad, India. He then took part in the 2004 Athens Summer Olympics in the welterweight category. He could not clear the first round and lost to Mustafa Karagollu of Turkey by a score of 20–25. In the 2006 Commonwealth Games, he won a bronze medal defeating England’s Neil Perkins in the semifinal but losing the final against South Africa's Bongani Mwelase.

Again in 2006 Asian Games in Doha, Vijender Singh decided to participate in the middleweight category. In this tournament, he won a Bronze Medal after losing his semifinal match against Kazakhstan's Bakhtiyar Artayev. Competing and winning a medal in that tournament was vital as it helped him qualify for the 2008 Beijing Summer Olympics. His participation in the competition was doubtful as he was suffering from a back injury but recovered just in time.

Vijender Singh prepared for the 2008 Beijing Olympics in Germany. He participated in the President’s Cup Boxing Tournament, which is seen as a dress rehearsal for the Olympic Games and fared well. In the 2008 Beijing Olympics, Vijender participated in the middleweight category and shared the Bronze Medal after having lost to Cuba's Emilio Correa in the semifinals on 22 August 2008. This win made Vijender the first Indian Boxer to have won an Olympic Medal.

In 2009, Vijender won another Bronze Medal at the World Amateur Boxing Championships and in the same year ascended to No.1 rank in the International Boxing Association middleweight rankings. In 2010, Commonwealth boxing championship was held in New Delhi, India. Vijender won the Gold Medal there. Commonwealth Games 2010 was held in the same year in New Delhi. But in this competition, Vijender Singh lost the game in the semifinal under controversial circumstances. He had to be content with the tag of a Bronze Medalist.

But in 2010 Asian Games, held in Guangzhou, China Vijender Singh made all Indians proud by winning the Gold Medal without any controversy in the middleweight category. Next, at the London Olympics in 2012, Vijender failed to win any medal, though he was able to reach the quarter-final stage. He won a Silver Medal at the 2014 Commonwealth Games held in Glasgow, Scotland.

In the same year, Vijender Singh made an unsuccessful attempt in trying his hand at acting. His debut Bollywood Hindi Film ‘Fugly’ tanked at the box office.

In June 2005, Vijender became the first Indian Boxer to have turned professional. He has an all-win record to date since turning pro.

In 2010, he was awarded the fourth highest civilian honour ‘Padma Shri’ in recognition of his outstanding contribution to Indian Sports.

Vijender Singh is the first Indian Boxer to have won a medal at the Olympics.

He is also the first Indian Boxer to have turned professional.

On 17 May 2011, Vijender Singh married Archana Singh. They have a son called Arbir Singh.