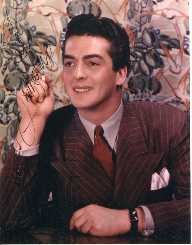 Victor Mature was an American actor who rose from the theater stage to mega films in Hollywood.

Victor John Mature was born on January 29, 1913, in Louisville, Kentucky. His parents were Marcello Gelindo Maturi, later Marcello George Mature and Clara Ackley. His father was an immigrant from what is today Trentino in Italy, while his mother was a Kentucky born of Swiss descent.

He attended St Xavier High School but never graduated. Mature did some odd jobs. He helped his father in selling butchery supplies. Mature sold candy in the streets and also worked in a local restaurant. He later joined the Kentucky Military Institute and the Spencerian Business School.

In 1933, Victor Mature moved to Pasadena, California. He studied acting at the Pasadena Community Playhouse. Mature got his first acting job at Pasadena. He went on to appear in 60 plays at the Pasadena Playhouse. His role in the production To Quito and Back was well received by the audience.

Victor Mature got his first film contract in September 1939. He signed a seven-year contract with American film director and producer Hal Roach. Under Roach, Mature did four films and musical production.

His initial appearance was in The Housekeeper’s Daughter. This was a comedy film done in 1939. He got a leading role in his next film appearance. In 1940, he starred in the movie One Million BC. Later that same year, he appeared in another film Captain Caution. With the guidance of Roach, Mature did a musical titled No, No, Nanette in 1940.

Victor Mature then moved to New York. In New York, Mature joined the Group Theater. He featured in the musical production Lady in the Dark. The following year, He moved to Broadway Theater. Mature did several stage appearances from January to June 1941.

From theater, Mature went back to screen film acting. The 20th Century Fox took over his Roach contract. With the Century Fox, he did seven appearances in screen films and musicals.

When the US joined WW2, Victor Mature offered to join the military. He was not drafted after failing a visual test. The US Coast Guard enlisted him after he passed the entry test. From July 1942 to November 1945, Mature took part in numerous military assignments in the US and the Pacific Ocean. Upon his discharge, he returned to his acting career.

In 1946, Victor Mature was in Hollywood for his first post-war film. He starred in My Darling Clementine. The production Kiss of Death followed in 1947. The two films propelled him to the top ranks of Hollywood actors.

After a two year break, Mature did feature in the famous Biblical epic Samson and Delilah. He appeared in The Robe in 1953. The following year, he did another film titled the Egyptian. Hannibal was a film he starred in 1960. Mature decided to retire from film acting in 1960. He settled at his home in Rancho Santa Fe, California.

Film directors prevailed over him to come back to acting. He came out of retirement and appeared in three films. In 1966, he did After the Fox. Then he did every Little Crook and Nanny in 1972. His last film appearance was in 1984. He took up a role as Samson’s father in the new version of the film Samson and Delilah.

Despite his macho like fame, Victor Mature was a man with common phobias. At one time, he opted out of the production crew of Samson and Delilah. He feared to battle with a tamed lion. Mature had a tumultuous private life. He got married five times in his life. His first marriage was in 1938 to Frances Charles.

In 1959, he married Adrienne Urwick. The union lasted for a decade. In 1969, the couple divorced. He then married Loretta Sebena in 1974. Loretta stayed with him until his death. His last marriage produced his only child. The daughter born in 1975 was called Victoria. In 1999, Mature died of leukemia at his California home.

Victor Mature had no formal education. His charming looks and sheer determination made him the most sought-after actor in Hollywood. He made 56 film appearances, two television series, and three radio shows. He has a Hollywood Hall of Fame Star.