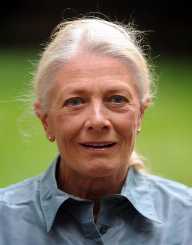 Vanessa Redgrave is a British-born actress. She is known for dramatic roles including her Oscar-winning role in Julia.

Vanessa Redgrave was born on January 30, 1937, in London, England. She is a member of an acting family. Her father Michael Redgrave was a well-known theater actor as was her mother, Rachel Kempson. Her sister Lynn and brother Corin also became known in the acting world.

Vanessa Redgrave attended the University of London from 1954 to 1958 where she studied acting at the Central School of Speech and Drama.

Vanessa Redgrave started her career with the Royal Shakespeare Company. She performed a number of classic plays including “As You Like It,” “A Touch of Sun,” and “A Midsummer's Night Dream." Her first film in 1958, Behind the Mask, starred her father Michael who also played her on-screen father.

She continued her work on stage and screen. In 1966, she starred alongside George Hamilton in the TV mini-series A Farewell to Arms. She also portrayed Anne Boleyn in A Man for All Seasons and Guenevere in Camelot.

Vanessa Redgrave's first award for her work came with an Oscar for her starring role in the 1977 film Julia. She was recognized for her role in the TV movie Playing for Time with an Emmy in 1980.

Redgrave, along with her sister Lynn, worked together in the television remake of the film What Ever Happened to Baby Jane? She continued taking on works in film and theater from Howard's End with Emma Thompson and Anthony Hopkins to a recurring role in Nip/Tuck along with her daughter Joely Richardson.

She had endured ups and downs in her career when it came to her political views. She paused from acting while she made her two unsuccessful races for parliament. Her performances on Broadway include her Tony-award performance in “The Long Day's Journey into Night” and a one-woman show titled “The Year of Magical Thinking.”

Vanessa Redgrave has not slowed down. She continues to perform in predominantly British film and TV series. She played Queen Margaret in the 2016 film Richard III starring Ralph Fiennes and is the voice of the mature Jennifer Worth in the British TV series Call the Midwife.

From royalty to Shakespeare and many roles in between, Vanessa Redgrave has over 140 acting credits in film and television alone. Playwright Tennessee Williams considered Redgrave, the greatest actresses of the time.

Redgrave married director Tony Richardson on April 29, 1962. The couple had two children, Natasha Richardson, and Joely Richardson, both actresses. Redgrave and Richardson divorced in 1967. She also has a son from her relationship with actor Franco Nero.

Vanessa Redgrave contributes significantly to many of the causes that she supports. Some of these causes include the closure of Guantanamo Bay, gay and lesbian rights, and AIDS research. She supported UNICEF and was appointed a Goodwill Ambassador in 1995.

She also won the Primetime Emmy award for the same role as well as Outstanding Lead Actress in a Limited Series or a Special for Playing for Time. Her Tony Award came in 2003 for her performance in “The Long Day's Journey into Night.”

Redgrave was awarded the Fellowship of the British Academy of Film and Television Arts in 2010. In 2017, she was presented with the Richard Harris Award by the British Independent Film Awards.

Vanessa Redgrave has been known for her political views. She protested against the Vietnam War and was arrested at a Ban-the-Bomb demonstration. She publicly supported an independent Palestinian state. Her Oscar nomination was opposed by members of the Jewish Defense League.

When she was cast for the role of a Jewish singer and musician in Playing for Time, the woman whose life was based in this movie did not want Redgrave cast in this role.

She and her brother were active in the Workers Revolutionary Party in England. She tried to run for parliament but did not win in both attempts.  Along with her outspoken views against the monarchy, she declined her invitation to become a Dame.