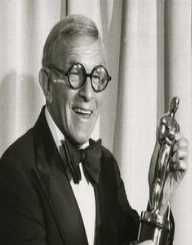 George Burns is the person who left the ribs of his fans hurting with his comedian gigs on both television and radio. With the help of his wife, Gracie Allen, the art of comedy ran for long after his death.

Burns was the best radio personality, television actor, comedian, film actor, theater actor and television actor. George was born in New York as Nathan Birnbaum on 20th January 1896. He began his art as a vaudeville comedian and developed his act with the help of Gracie Allen. He, however, outlived her by many decades that he even won the Academy Award.

Born in the Roman-Jewish family, George Burns came to the world on January 20, 1896, in the city of New York. He was one of the 12 children in that family. As a small child, he began making some money by singing in the saloons. He went ahead to even teaching dance while still young, and by reaching his 20s, he was a regular performer in New Jersey and New York.

The development of Burns career revolved around Gracie Allen. The two met during one performance in Newark. The meeting culminated in the two becoming husband and wife. They complimented each other in the comedy industry and took the whole thing to another level. As Burns came up with the jokes, Allen gave them the face and character. They became widely known as the vaudeville circuit at the time they were marrying each other in 1926.

With comedy being a dynamic venture and ever-changing, competition from other comedians like Fanny Brice and Al Jolson pushed the duo away from vaudeville to the radio now in 1929. They landed a regular show and managed to be on air from 1932 to 1950. Their play stood out and commanded a huge following and audience because of their focus on growing and bringing up talents of its listeners. In the 1930s, George Burns and Gracie had an involvement in about four films.

In 1950, their show made a debut from radio to the CBS television now. It made an immediate impact and was one of the top-rated shows. The popularity was maintained all through until Allen retired in 1959.

The person who started as George Burns’ partner ended up becoming his wife. Gracie Allen, whom he got married to in 1926, defined George Burns’s career from the beginning until her retirement in 1959. She passed on in 1964 because of a heart attack, something that affected him a lot. In the 1970s, he experienced heart trouble that led him to undergo a major surgery in 1975. The couple was however blessed with two children, a boy, and a girl, who passed on in 2007 and 2010 respectively.

George Burns recovered and returned to the film industry. In the first film he engaged in, he won an award for being the best supporting actor in that same year (1975). Burns impacted other films in the years 1977, 1980 and 1984. He came up with a TV show in 1987 that led him to be awarded by John F. Kennedy Center for performing arts in the year 1988.

In the entertainment industry, he went ahead to write the two most selling autobiographical books along with over eight other works. All this writing success was attributed to his experience and understanding in depth about this industry.

The cigar-puffing George Burns passed on at the age of 100 years in California, Beverly Hills. That was on 9th March 1996. That was slightly over three decades since the demise of his wife, Gracie Allen.