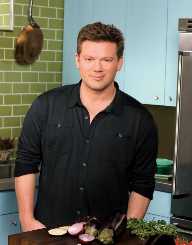 Tyler Florence was born on March 2, 1971, in Greenville, South Carolina. He began working in restaurants serving tables when he was 15 years old. While working in a restaurant in Greenville, his boss was a major inspiration for him. He liked the lifestyle of the chef, and he decided that that is what he wants to do with his life. When he took a trip to Paris at age 19, Florence grew more interest towards the art of cooking.

Wanting to pursue his dream, Florence enrolled at the Johnson & Wales University culinary program in Charleston, South Carolina. After graduation, he moved to New York City where he lived for several years. He worked for Charlie Palmer at Aureole, Rick Laakkonen and Marta Pulini at Mad 61.

After gaining experience in the New York’s restaurant business, Tyler Florence began working at Restaurant 147 on West 15th street. In 1998, he became the executive chef of Cibo and later opened Cafeteria in the Chelsea neighborhood of Manhattan. His restaurant was a major success and earned him recognition. He was then asked to join the Food Network and early on made several appearances. In 1999, he was signed to the show Food 911 as the host.

After hosting his first show, Florence went on to be the host of several Food Network’s shows, like How to Boil Water, Tyler’s Ultimate and The Great Food Truck Race. His other television appearances include the ABC show Shaq’s Big Challenge in 2007, and reality show Momma’s Boys. He has also been a guest on Oprah Winfrey Show in her nationwide Sandwich Showdown. Over the course of his career, Florence has appeared several times on The Today Show.

In 2008, Tyler Florence was planning to open his Bar Florence in San Francisco, California. In 2009, he opened a chain of luxury kitchen supply stores in Northern California and developed new restaurant concepts. He opened the Wayfare Tavern, Rotisserie & Wine, a fast-food restaurant in Napa, and El Paseo in Mill Valley, California. The latter only uses ingredients from Marin County. He is also a board member of Sun Basket -a subscription service for fresh ingredients.

From his first marriage with Christie Lear, Florence has a son. Florence is currently married to Tolan Clark, 1994 Miss USA delegate. The couple has a son and a daughter. The family moved from New York to Mill Valley in 2007.

Florence is on the board of nonprofit organization Afterschool Alliance, which works to promote and support quality afterschool programs. He and his fellow chef Joe Altman co-hosted a cook-off to benefit the organization. In 2008, he became the Dean of Culinary Education at Copia, Napa museum in California. Florence has also tried out his skills in writing, and in 2006 released Tyler’s Ultimate: Brilliant Simple Food to Make Any Time.