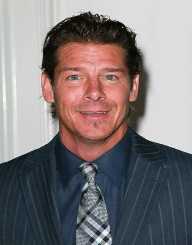 Television host, designer, and author Ty Pennington was born Gary Tygert Burton on the 14 October 1964 in Atlanta, Georgia. As a child, he had a reputation as being naughty and unmanageable at school, and it was only during the college years that he was tested and diagnosed with ADHD.

After graduating from Sprayberry High School in Georgia, Pennington enrolled at Kennesaw State University where he studied art and history. He later moved to the Art Institute of Atlanta where he did a degree in commercial art.

After working as an international model and carpenter, in 2000 Pennington first appeared on television in the reality show Trading Spaces. He was a carpenter on the show but progressed to host as he impressed audiences with his enthusiasm and vibrant personality.

Ty Pennington resigned from Trading Spaces in 2004 when ABC gave him his series Extreme Makeover: Home Edition (2004-2011). The show ran for nine years and was an overwhelming success, and he became a household name. Apart from the general public, celebrities were attracted to the show including the First Lady Michelle Obama who appeared on the show.

Ty Pennington moved to New York City in 2012 and worked on the talk show The Revolution which ran for six months. In one episode of the show, Pennington discussed his ADHD with Dr. Edward Hallowell.

As well as his work on television, Pennington is the author of two books: Good Design Can Change Your Life (2008) and Ty’s Tricks: Home Repair Secrets (2003). He also has a range of homeware and furniture products which are marketed and sold through Sears.

In his modeling days, he appeared in ads for Levi, Coke and many others. He was also in Cyndi Thomson’s music video I’m Gone (2002). Advertisements he has appeared in include Sears television commercials (2004), ADHD medication, Bayer Aspirin and mortgage loans.

As a sufferer from ADHA, Pennington had been open about his diagnosis in 1992. He speaks out on the effectiveness of ADHD drugs and on how they assisted him to concentrate and improve his grades as an undergraduate. In January 2005, Pennington was rushed to the emergency department in Atlanta, Georgia suffering from acute appendicitis.

Ty Pennington has been in a long-term relationship with Andrea Bock. She was previously his manager.

In 2007Ty Pennington was apprehended driving under the influence of alcohol and charged. His bail was $5000, and he was extremely apologetic and regretful about the incident and went on to make a public apology for what he called his error of judgment.

Ty Pennington has done a lot of charity and philanthropic work including working with Sears with on the Building Community Together initiative. He was also active in organizing assistance during Hurricane Sandy when it hit New Jersey in 2012.

People’s Magazine listed Ty Pennington as one of the USA’s Top 50 Bachelors in. 2002

In 2006 he won a or Extreme MPrimetime Emmy Award makeover: Home Edition (2003) - shared with his producers.